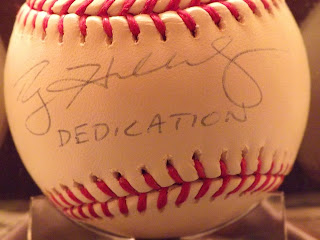 I'm shamelessly cribbing a lot of this from a post I wrote for my theatre blog, dated September 28, 2007. From what I wrote then:

I’ve just returned from meeting Roy Halladay, Toronto Blue Jays pitcher extraordinaire. This has been a dream of mine for a while now and I’m almost jumping out of my chair.

But wait, I can hear you say. He’s a baseball player. What does he have to do with the arts?

Well, athletes and artists have a great deal in common. Both are asked to make huge sacrifices to follow their profession. Most athletes make very little income and need another job, as do most other artists. Both groups need a lot of study and practice to hone their skills. Both need to make their work fit in with the work of the team. And both need to have incredible drive to succeed.

...The owner of the store who did the signing today told me that he didn’t care about how much the autographs cost (that was negotiated by his agent) but only wanted to talk about how the store was partnering with his charity. And he was incredible with everyone who wanted his autograph – spending time with them when they wanted it, being encouraging with the kids.

...I have watched the way he pitches. When he’s on, it’s poetry. What really sticks with me is the way he focuses on what needs to be done. He allows himself to get angry when things don’t go his way, but almost always he expresses it then shakes it off and gets right back at it. That’s a valuable skill for anyone.

I asked him to sign a baseball, along with one word that summed up success for him. He wrote dedication.

I remember his graciousness. I went because I wanted to meet him and thank him for getting me back into baseball. I was one of those who walked away after the strike in 1994. I was disgusted when they cancelled the World Series. My feelings were if they weren't going to respect the fans, it wasn't something I wanted to be a part of. That feeling stayed rooted for almost a decade, until my brother convinced me to watch a game with his kids. So I went, feeling so removed from this thing I loved. Around the 6th inning it dawned on me that this pitcher was pretty good. That pitcher was Doc. That was the first time I had felt the spark. It took another year before I was back for good but he was the start.

I have this habit of wanting to do something out of the ordinary. So when it was my turn, I asked him for the word. He laughed and spent a moment thinking about it. I then waited around for photos afterwards and I asked him to sit in a chair so that we'd actually be in the same frame. He was gracious about that too.

There was a discussion here last week, the theme being Don't Meet Your Heroes. I'm really glad I did.