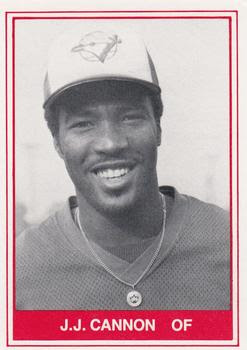 This one's for my brother who, as a wee lad, fell in love with JJ Cannon. We all started calling him JJ (my aunt still does) which then shortened to J, which we all still use today.

So who was this guy?

Came as part of the Alan Ashby trade from the Astros. Was in AAA at the time, having been picked 16th overall in the 1974 January Draft (there were two drafts that year!). Played until the end of the 1980 season but only played 131 games in that span.

His Blue Jays career was summed up thusly:

For 1979, Cannon got his first regular big-league playing time after a trade to the Blue Jays. That year, he got into 61 games, hitting .211. In June, Cannon was a defensive replacement in the outfield, pulling back a Yankee home run, making it an out.

"It was hanging up in the air," Cannon told The Associated Press afterward. "I didn't know if it was going out. I got back as far as I could and I got lucky and brought it down."

Cannon played 70 more games for the Blue Jays in 1980. He got 50 at bats, but just four hits, ending his big-league playing career.

A few years later, he started a coaching career with the Jays, starting as a player/coach with the Kingston Blue Jays. He moved through different teams within the org, winning Manager of the Year with the St Catharines Blue Jays in 1993. His managerial style was described as focusing on defense and speed, not a surprise.

In 1999 he moved to the Braves organization. In 2001 he was named Baseball Weekly's Minor League Manager of the Year with the Lexington Legends, who he managed to a championship. At some point he lost the job and bounced around as a coach with a couple of orgs. The most recent info I could find about his whereabouts was mentoring teenage boys at Kentucky Methodist Group Home in early 2015,