How to Be a Good Fan at a Jays Game 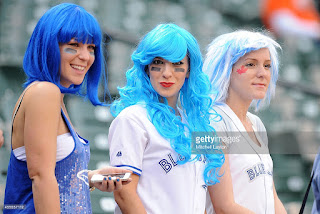 Below are some guidelines that will improve the experience for you and your fellow fans when you attend a Blue Jays Baseball Game:

Get to know the people that are sitting around you. You can't High-5 strangers after Eddie goes yard.

Never make out with anyone unless you are on the Kiss Cam.

If you bring a beach ball to the park you deserve to be locked in a theater that only shows Sandra Bullock movies for all of eternity.

If you've already went through puberty you're too old to do the wave.

Stay the fuck off your cell phone.

Make sure your hygiene is on point. 40 thousand people sitting on plastic seats, packed into a concrete humidor = schweaty schnutz. Liberally apply deodorant, cologne, even Axe spray prior to leaving for the game. I'd rather it smell like you drank a vat of Brut than get a whiff of onion pits. 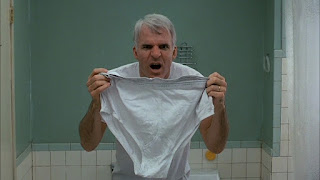 Don't get sloppy. Several beers is fine but slurred speech and running mascara is in bad form.

Tip the vendors. The beers are 11 bucks but the vendors make minimum wage and are usually good people.

Don't piss on the toilet paper. You know who you are.
I've only been in a bad enough way once to ever consider shitting in a stadium. Looking over at the sopping toilet roll was disheartening. Thank God I got a clean break on that one.

Come up with colourful chants and heckles. Do your research and roast guys.

Make funny signs to hold up or hang over the railing. 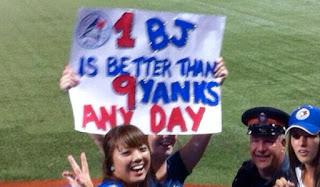 Rally cap your hat if your team is behind late.

Always give your foul ball to a kid.

Throw opposing team home runs back on the field. It's the only time it's acceptable to throw anything on the field - looking at you Game 5 fans.
If your arm is good enough try to hit ARod with it.

If you bring a Vuvuzela to the park there's a fair chance that you're an asshole. 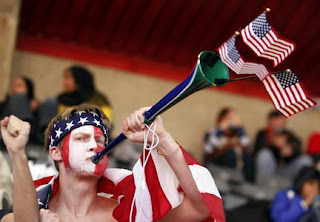 Don't chew at the game. No one wants to pay 60 bucks to sit beside a dude spitting in a cup for 4 hours.

Every time Donaldson leaves the dugout to run out to third, you and your crew should stand up and toast him with your beers screaming his name loudly. We used to do this for Reed Johnson, we'd yell "Reeeeeeeeeeeed Yonson"
Not sure why we pronounced the J as a Y but he'd tip his cap anyway and we'd go nuts and chug half a beer. He was Beaut, still say he should be on the Level of Excellence for his chin whiskers alone. 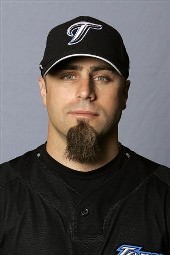 For sunny day games, go to Gretzky's before the game and have beers on the rooftop patio. It's pretty Okay.

When you are going back to your seat and you are moving down the aisle in front of seated patrons, always shuffle with your ass to the seated fans, dick first is bush league. If you accidentally kick over someones beer offer to replace the spilled spirit or put their kid through college, whichever is cheaper.

When at the urinals don't talk to your dick. (this one from experience)

Give the finger to the people that are doing the Skywalk on the side of the CN Tower trying to watch the game for free.

Don't ever be this guy: This is the most important rule so please listen up.....
If you have front row seats anywhere in the building, then employ some situational awareness.
Know when a ball is coming your way whether it will help or hinder the Jays if you try to catch it.
If it's a foul ball by Eddie coming down the 3rd base line and Machado is trying to camp under it then you better be all Elbows and Assholes.
If Wieters tries to pick off Pillar at first and he airmails the throw down the right field line don't touch that shit. Kevin is coming all the way around.
If Adam Jones skies one and it looks like Josh might jump three rows deep, kill a small child and still come up with the ball then hold your fellow fans back and let that child die a hero.

I had a great coach that used to tell me, "before every pitch know what you're gonna do with the ball if it's hit to you".
Same goes as a fan.
Be a knowledgeable fan.
Be a smart fan.
Prior to a ball getting put into play, think about what you should do if a ball comes your way.
It's the one thing a fan can do to help the boys other than cheering.
Be smart, have a few pops and have fun.
Posted by formerly the smasher at 12:00:00 PM