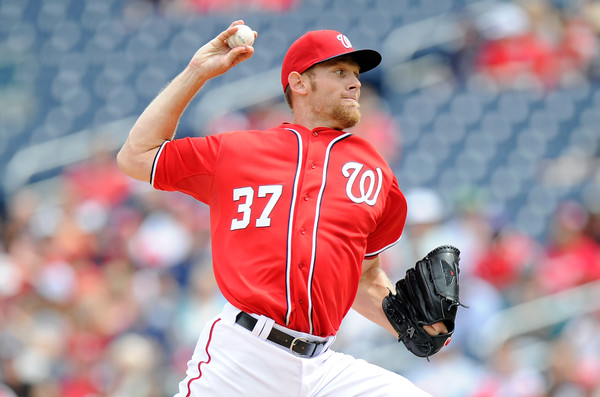 As I mentioned in my post from yesterday, the Blue Jays have a lot of their core group of players in place for the 2017 season. Aside from R.A. Dickey, Brett Cecil, Jesse Chavez, and Drew Storen, the majority of the team’s arms are under club control. The big loss after this year is in the middle of their line-up, with long time Blue Jays Jose Bautista and Edwin Encarnacion looking to test free agency this summer. This post is not meant to build a case against the club re-signing them, simply listing some options that are slated to hit the market.


MLB Trade Rumors has done a nice job ranking the potential class based on earning potential. This is used as a benchmark for setting the high-end of the market for the free agent class as a whole. Stephen Strasburg, assuming he remains healthy, looks to be the highest paid free agent this winter. His talent would fit the Jays needs, as well as every other team in baseball, as a true top of the rotation ace. I just think seeing him pitch in a Blue Jays jersey is too much of a pipe dream. But so was David Price, so let your imagination run wild and picture him (above) in a #37 Blue Jays uniform. Yoenis Cespedes, assuming he opts-out of his deal with the Mets, looks to be another top power bat that could test the market. Ultimately, the impact Cespedes would have on the Jays would be related to setting the market for Bautista - if the Jays want to spend money on an expensive outfielder it would make more sense to simply re-sign Jose.

Josh Reddick, Age 30, RF, Oakland Athletics
Outside of Carlos Gomez, who could touch triple figures if he can retain his form of 2014, Josh Reddick is probably the most desirable option for starting outfielders. He's currently making $6.5 million in Oakland, and has quietly posted seasons of 5.0, 2.4, 3.5, and 3.5 WAR in the past four years. He'd fit in this outfield perfectly, though his contract may be too rich for the Jays, especially if he has a good year in 2016.


Brandon Moss, Age 33, 1B/OF, St. Louis Cardinals
This is a player who has hit 30 and 25 HR in Oakland in 2013 and 2014, although had a down 2015 where he managed to post a combined -0.5 WAR between Cleveland and St. Louis. Most of his negative value was defensive, and he still hit 19 HR on the season. He currently makes $8.25 million and seems destined for the DH position. The defensive metrics don't seem to like him too much in right field, though he might be passable for short periods. You would not want him playing there every day. In St. Louis, he is blocked at 1st base by Matt Adams and will likely see limited at bats barring a significant injury. Seems like he could be a potential bargain power option in this market. Though he didn't exactly work out in Cleveland, Shapiro made the move to acquire him once and could be intrigued again.

Justin Turner,  Age 32, 3B, Los Angeles Dodgers
He has played every infield position for Los Angeles, as they couldn't find enough at-bats for him. A true late bloomer, he's posted an incredible 4.2 and 3.9 WAR in his two seasons with the Dodgers in limited at-bats, mostly via the bat. The fact that he can bounce around on the diamond is huge help to any ball club. He hit .340 and .296 the past two seasons, and is taking regular at bats this season at third base. Obviously Josh Donaldson is locked in place there, but I'm sure you could find a way to use him with his versatility. It's worth noting that he hasn't played in the outfield with any regularity in his career.

Mark Trumbo, Age 31, 1B/DH, Baltimore Orioles
Ah, the curious case of Mark Trumbo. From 2011-2013, he was an established power hitter with the Angels, clubbing over 30 HRs (one with 29) in each season. Then, injuries and batting average struggles have set in, and he bounced around to the Orioles who are taking a shot on him at just over $9 million this season. If he has a good year, though, I could see the Orioles making a push to keep him around. I don't question his power stroke.

Ian Desmond, Age 31, OF/SS, Texas Rangers
A natural shortstop, Texas signed him to a one-year value building contract to play LF in Texas. It was a strange move to me, I thought Joey Gallo or Nomar Mazara (recently called up) would be able to fill the role. Instead, they went the route of the Red Sox, and decided to try to convert a middle infielder to left field. I hope it works out better for them than the HanRam experiment - wait a minute, Fuck Texas - scratch that. Even if 2016 works out for him, I bet he wishes he could still sign that $100 million dollar extension Washington offered him before the start of 2015. He was a 3 win player from 2012-2014, though as a shortstop, and I really have no idea what the market will be like for him or what position he plans on playing.

Andrew Cashner, Age 30, SP, San Diego Padres
He was okay in 2013 and 2014, and downright bad last year, according to Baseball References WAR (2.4, 1.9, and -0.9, respectively). I got curious so headed over to FanGraphs, where it seems in 2014 he outperformed his xFIP (2.55 ERA, 3.53 xFIP) and in 2015 he underperformed them (4.34 ERA, 3.84 xFIP). The scouting report has him with a plus pitch in his fastball, but has trouble with his secondary stuff. He's had some injury troubles, and 2015 was his career high in innings pitched with 184.2 innings. After Stephen Strasburg, he's literally the next best starter on the market. That's how bad it is for starting pitching this winter. I doubt he'd be worth his contract, but he is worth noting because he'll likely one of the top names on the trading block.

Kenley Jansen, RP, Age 29, Los Angeles Dodgers
Aroldis Chapman is out there, and can be literally unhittable at times, but I think Kenley Jansen is the most attractive reliever on the market. Less baggage and similar production. LA will probably make an effort to keep him around. He's got crazy strikeout rates (36% strikeout minus walk rates) and uses a cutter frequently - it's basically his only pitch. Remind you of anyone? He's had at least 25 saves in each of the last three seasons. Thought it's unlikely he ends up a Jay, I wanted to include him to talk about the closer position in general. As of today, Jansen, Chapman (upon return), Jonathan Papelbon, Jason Grilli, Mark Melancon, Fernando Rodney, David Hernandez, and Brad Ziegler are all in closing roles or a part of a closer committee. More on that below.

Brett Anderson, Age 29, SP, Los Angeles Dodgers
Undeniably has the most upside of any pitcher on the market besides Strasburg. He just can't stay on the field. The Jays have expressed interest in him before, with Anthopolous almost acquiring him in a trade that didn't pass physicals. He managed 180 solid, but not spectacular, innings in 2015 before undergoing off-season back surgery. He'll receive a one-year value-boosting type contract, as he'll miss most or all of 2016. There's honestly just not a lot of starting pitching out there this off-season, so you won't find upside like this anywhere else. I'm really dumpster diving to try to find any starters worth mentioning.

Mark Melancon, Age 32, RP, Pittsburgh Pirates
He finished 2015 with over 50 saves, and has been a solid back of the bullpen reliever since he got to Pittsburgh. Ray Searage has done wonders with him, among others, and he was able to grab the job after Jason Grilli went down to injury and never let it go. Like Jansen above, I doubt he would agree to go anywhere that wouldn't give him the closer role, so the Roberto Osuna decision will impact the Jays interest in the back of the bullpen options.

Mat Latos, Age 29, SP, Chicago White Sox
John Danks, Age 32, SP, Chicago White Sox
I grouped these two together, though they are really quite opposite pitchers. Latos is kind of a dick, and hated everywhere he goes, but has ranged from 3-4 WAR every year from 2010-2013. He's only pitched a little over 100 innings the past two years, but managed to post 1.7 WAR in his last year with the Reds in 2014, and bounced around three teams in 2015 while pissing everybody off in the process. Danks is the definition of a back of the rotation innings eater, and is nothing spectacular at this stage of his career. From 2008-2011 he was a valuable member of the White Sox rotation (with our good friends Mark Buehrle and Gavin Floyd!) before arm injuries derailed his career. He returned to the majors in 2013 and pitched 138/193/177 innings, posting 1.7 WAR last season.

As there is every year, there are a number of set-up guys or former closers that will be looking for work. I may be post-season biased, and he's up there (age 34) but Sergio Romo seems like a strong option for the back of the bullpen. There are others, too. Our own Brett Cecil, Matt Albers, Joaqin Benoit, Luke Hochevar, Neftali Feliz, and Kevin Jepsen all could be options to fill the bullpen next year.

There are a few interesting players with vesting options, club options, or opt-out clauses. This list includes Yoenis Cespedes, Carlos Santana, Kendrys Morales, Scott Kazmir, Wade Davis, Gio Gonzalez, Jon Niese, Matt Holliday, Matt Moore, James Shields, and Jason Grilli, among others. This is a pretty weak market as is, so it would greatly help the Jays if some of these guys managed to hit the market. There is a chance that there will be a lot of money out there with not a lot of places to spend it. That usually leads to bidding wars and inflated contracts. Not games that the Jays can afford to get into.

Of that list above, Carlos Santana sticks out, partly because his lefty bat would play well in the SkyDome and has the Cleveland Shapiro/Atkins connection. He's got one club option left at 12 Million, which would probably be exercised, so if the Jays were to acquire him it would likely be via trade. I think if Kazmir has a good year he will likely opt out, and instantly become one of the most interesting pitchers on the market. James Shields could opt out too, however he's got a lot of money on that deal and at his age, I'm not sure he can sign for more than he currently has on his deal.

Former Jays Dioner Navarro, Colby Rasmus, Yunel Escobar, Adam Lind, and Rajai Davis are also all free agents, in case the club had any interest in bringing them back. I don't see them having too much interest in any, although if Navarro was interested in returning as a back-up catcher on a reasonable deal, it would make sense.

I want to conclude by making a couple of counter points to what I said about Osuna yesterday - I personally believe that he will continue to close. I'm not sure how the Jays could even build up his arm enough between now and 2017 enough that he could be able to start. I definitely understand the value of having him start next season, as well as long-term. This FA class is definitely stronger with high-end relievers, if that is the route the Jays wanted to take. There is very little to be excited about with starters, so if they could somehow get, say, 160 innings out of Osuna in the rotation, the closer role would probably be easier to replace. 160 innings seems like a big jump from the 100 or so he will likely throw this season, so it's probably the most important player development decision the new management group has in front of them in the next year.
Posted by Nego at 12:00:00 PM