Ode to getting to the park early

I'm going to be at the game tonight, an early birthday present from a friend. A friend who didn't get his act together enough to get the ticket to me in advance. (Why it couldn't be emailed to be I have no idea.) I am to meet him at Gate 11 at 6:50 pm (!).

That sucks, because I'm the person who loves to get there early.

Growing up, I lived in walking distance to Exhibition Stadium. The team was just starting out and really cheap outfield tickets were easy to get. A great afternoon out for the whole family. The seating was general admission but we had "our seats" - the first section on the right, the row below the entrance ramp, on the aisle. This made bathroom trips easy for our tribe and less walking at the end of the game (helpful for the little ones).

It's the first entrance on the left in this picture: 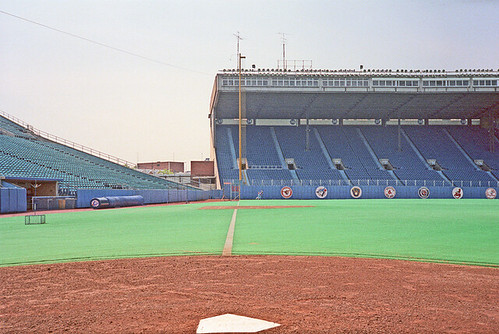 Gets me all misty eyed. I kinda miss the place.

We'd come early to get our seats and to watch batting practice. Since we were at the foul pole, BP balls were easy to go and get. My dad tells me there's a bag of them in this house somewhere. My dad would get us drinks (we would bring our own snacks) and not have to miss a pitch. (Don't get my dad started on how he missed the first triple play in club history because he was waiting in a concession line in the concourse. He now never leaves his seat during the game.)

So I got into the habit of getting to the ballpark early. It's something I still love. I like getting there about an hour before first pitch. I wander into Jays Shop to see if there's actually decent apparel for women.

This is not it.

I check out the menu options on the 100 level and find that one stand that actually serves mixed drinks. (500 Level, get with the program!)

This is probably what I'm stuck with.

I walk pretty much all the way around, then stop at the broadcast booth to watch Jamie Campbell do his thing. (I'm a big Jamie fan and just ignore his broadcast partner.) 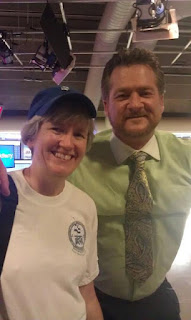 My friend made me take this picture. It was her tickets. What could I do?

I used to wander by the seats over the Jays bullpen to see if  Erin was there. Sadly, she's given up her seats. Then I wander back to my seat to watch all the pre-game stuff that starts at 6:45. Usually I attempt to take a picture from my seat with my shitty phone camera and tweet it before the game in case anyone I know is there.