The following is my personal view and experiences on Catching, but no Statistics, Analytics or pie charts were harmed or consulted in the making of this post. 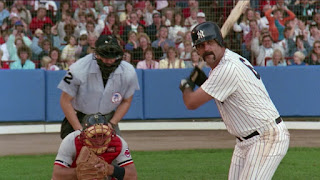 His back foot steps into the box and he looks at his bat, turning it so the label faces my pitcher.
A black brackish venom is propelled from his lips and lands next to my foot.
Squinting from the sun I look up at this goatee sporting, gold chain wearing asshole.
He moves his front foot into the box and digs a little until he's comfortable.
He takes two practice swings before he brings the Louisville back above his shoulders.
This son of a bitch is one of the best hitters in the league and easily the most hated.
I won't say what his nickname is but it rhymes with cunt.

I look around.
Runners at first and second, one out, and their toughest hitter at the plate.
We've discussed him at length pregame, we know the book. A righty hitter who is pretty good on the fastball but murders anything offspeed. He's 0 for 2, we've given him a steady diet of fastballs on his hands. He likes to swing and has gotten frustrated enough to fist a few to the second basemen. So as he digs in I'm thinking maybe more of the same.
But because I'm an observant motherfucker I notice that "clean-up-guy" who is usually at the top of the box to catch breaking balls before they can break, has now moved back in the box.
His back foot is on the chalk.
I think he's cheating fastball.
I drop 2 fingers. 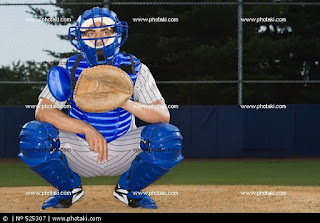 My pitcher is confused and shakes.
Stupid bastard.
I throw down 2 again.
He knows me.
He knows I'll kill him if he shakes me again.
He chucks a pretty yakker.
Clean up guy is fooled and rolls over on it bouncing a 2 hopper to short which gets spun into a double play.

We run off the field and pitcher smacks me on the ass and smiles.
I say "don't fuckin shake me off."
We laugh, beers will be on him.

Okay, enough personal anecdote. I'd like to talk about one of the least understood positions in baseball. Catching is unlike any defensive position in the game. No where else on the field other than pitcher can you have as much of an impact on the game as Catcher.

Baseball teams have their analytics and their books on players but there are a huge range of factors that go into game calling that you won't find in any of them. When you squat behind a plate looking up at the hitter you can infer a lot from his actions, demeanor, and the situation itself. Sometimes even as a viewer at home I can tell when a young player is so amped because the bases are loaded and the games on the line that you can tell he'll swing himself right out of his cleats on a breaking ball.

Batters change strategy all the time.
If you've heard Josh Donaldson interviewed you'll know that he's constantly adjusting to how the league is pitching him. Buck is always talking about how the hitter needs a plan.
So does the pitcher and catcher.

There's no magic formula to negotiating through a MLB lineup.
Yes hitters have tendencies, they have cold zones or can be susceptible to certain pitches but they don't get to the best league in the world without being able to adjust. Papi has a small hole in his swing a little bigger than an egg, just above his elbows, inner half. Everyone in the league knows this.
But if you were to just try and throw fastballs there for 4 at bats you may get him out once or twice. But eventually when you miss or he adjusts to the predictability, he'll crank one 450 feet, ooze his way around all 4 bags, kiss his fingers and then point to the heavens.
You need to mix, you need to change pace, you need to get hitters off balance.
Every hitter has a weakness but in order to exploit it you need to get him thinking.

Our old SS Alex Gonzalez could hit fastballs and he could hit breaking pitches, but for some reason he'd always sell out to one or the other. I've never seen a guy take so many 3rd pitch strikeouts because he was looking fastball and someone dropped a hook or vice versa. He was a "Guess" hitter.
This means he would pick a pitch to sit on even when he had 2 strikes.
I hate this approach in team mates or in the teams I cheer for. It always seemed selfish to me and was not a successful approach. 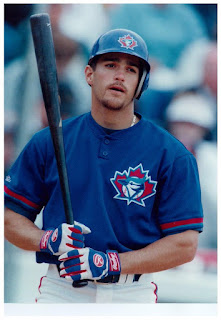 But I really hate those guys as a catcher. They usually end up being shitty hitters because with 2 strikes they need to widen their zone which is good and if they sell out to one pitch then you drastically reduce their odds of making contact.
Good. So why do I hate them?
Because every once in awhile these guess guys guess right and a perfect 1-2 pitch gets run into and your down a run. Can't defend that.

There are so many things that go into game calling that you can't put in a scouting report.
Your advanced scouting team may show up and say Kiermaier is all over the fastball inside right now.
But in the first inning maybe he lays out on a ball in centre and comes up looking a little distressed.
He walks to the plate looking a little less than comfortable.
This changes things and now I wouldn't neglect the inner half despite the advanced reports.
In my experience when you're hurting you are a little more tentative.
I'd call fastballs in close to the body of an already ailing hitter.
The last thing you want when you are sore is to take one in the ribs.
If he turns one around all the power to him.

Another example of where catching strategy is unseen but can be pivotal is when there are runners on. JP (god bless him) was famous for overly calling fastballs when runners were on. He was trying to give himself a chance to throw runners out. Selfish shit. Of course this would pigeon hole pitchers and they'd often get teed off on for big innings.
Good catchers don't change their game calling depending on who's on the bases.
You may have games where you look bad to the fans because players easily steal a few bags off you. Most fans won't notice that the base was stolen off a slow curveball, they'll just see a guy dusting himself off at two and think "Catchers got no arm." Teammates, pitchers and coaches know better.
You may have caught him if you called a 1-2 fastball but then you're cheating the pitcher and your teammates.

Catchers also get run. There are new rules so you can't wango a catcher without the ball but it largely remains the only position on the field that you can hammer a guy if they do have the ball. 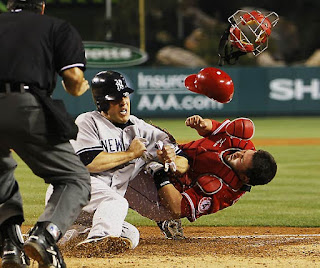 Now for the lost art.
It's completely within the rules to talk to the hitter.
Even talk during their swing.
Catchers used to make a career out of it but it's a dead art.
Players view it as bush league now.
I say fuck them.
There are still a few guys who will chirp, Pierzynski is one.
The last notorious talker was Mike Lavalliere.
He'd chat for an entire game, rumoured to often get umpires laughing at his one liners.
He'd get a guy to pop out talking about the shit he took in the clubhouse.
I practice this school of catching.
Everybody who steps near my plate gets talked to.
Some of it even nice.
But you ain't getting to swing at my pitch without hearing my pitch.
Batters hate it, it's distracting and they lose focus.
Russel should bring this back. 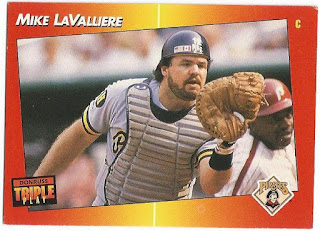