So You Entered a Basball Fantasy Draft? 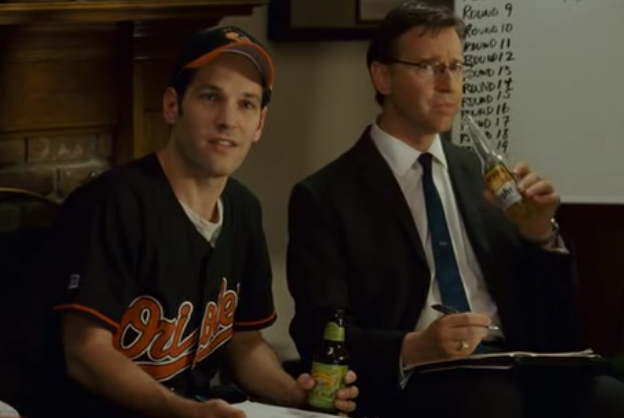 After an Invitation from Steve-O, a bunch of the fine folks who hang out here have decided to play some fantasy baseball this year. It's a lot of fun and will give us all some amusing ammo to fire holes into egos. (Especially mine)
We have chosen a simple online draft with time limits and a bot that takes over if an owner isn't present. Since those types of drafts are quick and painless I won't discuss them here.

I have a group of friends that take part in an in-person Rotisserie style Auction draft every year. It's a complex rotisserie auction with Fantasy Dollars, long lists of rules, and a 200 dollar entry fee.
In short, we're big baseball nerds.

Ok, that's the boring shit, now to the point of the post. Let me introduce you to every guy that you will meet at a Fantasy Baseball Pool.

1) Comatose Guy: The most important part of every fantasy baseball draft is drinking. But this guy brings it to an all new level. He shows up with a case of beer (for himself) and several bottles of gross liquor like Fireball, Jagermeister, Butter Ripple Schnapps and of course Tequilla. As the draft progresses and everyone get's drinking, guys usually end up nominating a player that has already been auctioned off.

This is a serious draft foul. Comatose guy sets you up with a shot of liquor and it has to "git down yer hole" in a timely fashion or he sets up another. It's not fun. Comatose guy prides himself on how he can put it away "no probs", so he gladly joins every poolie who commits a draft foul by having a shot himself. By the end of the pool some 6-8 hours later he's usually crashed on a couch snoring obnoxiously.

2)Serious guy: Serious guy shows up with his laptop, collated notes highlighted in various shades of fluorescent marker and a prospect bible. Serious guy will have a footlong from Subway or some other meal that he'll use as an excuse for why he's not drinking for the first hour or so. Really he just wants a competitive edge by being less drunk then the rest of us. I like to sick Comatose guy on Serious guy, I'll make up lies as to why he deserves a shot. Serious guy hates shots and hates me for fucking with his plans.

3) Zero Etiquette Guy : This guy will leave piss on the seat EVERY time he goes to "rock a piss."

4) Snack Guy: This guy shows up looking like he's robbed a 7-11. He's got tubes of Pringles, various jerkies, pretzels and bags of candy. He's got a hole in his soul that he's trying to fill with processed cheese. Snack guy usually has a thick layer of Doritos dust on his chin less than an hour into the draft. If you have the misfortune of sitting next to Snack Guy then you'll be wearing nacho shrapnel every time he opens his mouth to bid. At some point in the auction he'll demand everyone contribute a 5'er to order Pizzas. By the end of the draft his section of couch will look like Dexter's kill room.

5)  Movie Guy : This guy will repeatedly quote lines from Moneyball, Bull Durham, Major League and at some point will yell "Honey I got Matsui!"

6) The Lamb : This poor bastard is usually a brother in law or a friend of a friend who just came to meet some new guys. He knows nothing about baseball and will end up drafting Tommy John victims and dudes who just got sold to the Yomiuri Giants. And because you're all a bunch of Jackals you'll just snicker and keep it to yourselves. The Lamb is dead money. You love The Lamb.

7) Diarrhea Guy : It never fails, every pool I've been to, at least one guy has diarrhea. If you have the misfortune of visiting the toilet after this guy it'll look like a grenade went off in a pot of chilli.
He'll make you wish you'd visited the can after Zero Etiquette guy.

8) Know it all Guy: Every pick you make was an over pay, every pick he makes was the tits.
He's so annoying that at some point Comatose Guy will threaten to punch him in the throat and secretly, most are hoping it happens.

9) Whipped Dude : His phone won't stop buzzing, it's his wife. He looks at it out of the corner of his eye afraid that eye contact will only further anger it. His wife hates that he's a grown man drinking, playing fantasy baseball in someones basement. She's probably right.

Regardless of what Guy or Gal you are, Fantasy Pools are fun.
Here's hoping you're all a bunch of Lambs.
See ya tonight.
Posted by formerly the smasher at 12:00:00 PM