The Blue Bone of Contention 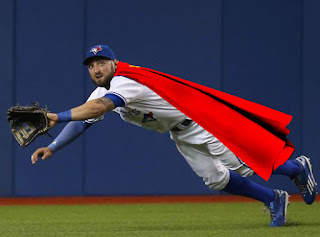 Suppose I popped out of a lamp and if you rubbed me the right way I'd honour your one wish.

Because I know you're a Toronto Blue Jay fan I already know what you want.

I'll give you a new, young star.

Wait, I can do better.
I'll make it so in his first full year, statistically he's one of the best base runners in the game.
Kid will turn singles into doubles, go first to third on ground outs, score on the shallowest of flies and steal bases at an 86 percent clip.

Wipe your chin, drool is unbecoming.

Ahhhh fuckit, I'm in a mood here, I got more for ya.

I'm going to make him one of the top 4 defensive Centre Fielders in all of baseball.
I'll give him mad ups so he can scale the tallest walls.
I'll give him such innate instinct that his reads off the bat will give him the best route efficiency in baseball. (statcast)
I'll give him a chin and body made of Iron.
I'll give him eye hand coordination the likes of you've never seen, if it's between the circles he'll get wood on it.

Okay, enough of the Genie shit. Lets talk some Pillar.

Growing up Pillar was a pure athlete, an utter phenom. In high school he was a three sport star earning All American Status in Baseball, Football and Basketball. From there he went to California State University and proceeded to destroy CCAA pitching. He was named 2nd Team all star two years running and then ramped things up his Junior year. He rattled off a 54 game hit streak (new NCAA Division II record) hit .379 for the season, won a Rawlings Gold Glove and was 1st Team Allstar. In his final year he hit .369, finished the year with a 1.000 fielding percentage and left as the schools batting champ.

As ridiculously decorated as Pillar was scouts were still not fully convinced. One report said "does many things well but doesn't have a true standout skill." Pillar fell to the Blue Jays in the 32 round. His signing bonus was one thousand dollars. (That's $1000, one - triple zero !)

Undeterred Pillar immediately went to work reporting to Bluefield of the Appy league.
He won the batting title and led all Jays affiliates with a .347 average.
He still holds the team records for BA, Slugging and OBP

Over the next 3 years he would continue to rake as he was promoted through the organization.
He would never hit less then .307 and over his minor league career he would hit .322/.364/.477 with a 109-32 Stolen Base to Caught Stealing record. Still, respect was hard to come by. Various prospect Rankings had him usually rated in the 20's despite having far superior numbers and defensive abilities than his peers.

"It's hard to hold your ground when everyone is trying to bury you under it." - Koyczan


But hold his ground he did, and eventually Kevin was promoted to the Blue Jays in 2013 as a late season call up. Things started slowly but Kevin (the prospect that scouts said wasn't) was playing Major League Baseball. In 2014 amid a stretch where he was being used primarily in platoon situations he was lifted when a RH reliever came into the game. The dugout blowup that followed looked to be borne of personal frustration and a fire to succeed. But regardless of why it happened, it was wrong. Pillar knew it, fans knew it, and by the time the game was over Kevin was on his way to Buffalo.

Many thought Pillars days as a Jay were over. He'd be buried traded or released.
But he held true to his story. He worked his ass off, continued to hit and made it impossible for the Jays to forget about him. Two short months later he was in Toronto to face the Bastard Sox.
He hit a double his first game back, then another the next night and followed that with two hits against the Yankees. Over the next five weeks he'd bring his average up from .217 to .267 while hitting for more power. Out on the carpet he was giving the fans glimpses of his future fearlessness making gutsy grabs while crashing into walls, warning tracks and whatever the fuck else dared stand in his way. He ended the year like he started his career, proving doubters wrong.

Then 2015 happened.
Sweet Delicious 2015.
Though Kev broke camp with the Jays he still wasn't the full time Centre Fielder.
Dalton Pompey had a strong spring and pushed Kevin to LF.
But Pompey struggled out of the gate and by May was back in the minors leaving Centre Field for Pillar. Certain (m)analysts were worried it would be too much pressure.
Pillar kicked the fucking doors in.
He dove, climbed, crashed and bashed his way to every flare, fly and smash.
He got asses outta seats.
He broke scapula's.
His glove saw more balls then the average whore house.
The Rogers Centre power alleys became known as "where doubles go to die",
He ran the bases like his dick was on fire.
He was a human highlight reel.

When the smoke cleared Pillar led the Jays in Stolen Bases, was second in WAR, Hits, Doubles, and led all Jays in "Holy Fuck did you see thats?".

Some pundits still doubt him.
Doubt is just another obstacle to Pillar and we all know what he does to obstacles, he scales, slams and destroys any that get in his way,