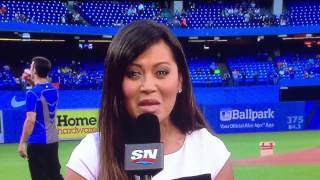 I keep saying that Toronto media is the worst. And it's true. There's a lot of garbage clowns out there and they're dragging some former great journalists down to their level. (Cathal Kelly, I'm looking at you.) But Boston takes it to another level. They were the public face of the tampering the Sux did with John Farrell. They ran Francona out of town.

I want to talk about what they do with their women reporters.

Exhibit A: Jennifer Moran having to resign from Comcast SportsNet because of rumours of an affair between her and John Farrell (Mr "Dream Job" himself). As Deadspin piled on (emphasis mine):


As for the rumor itself, there’s not much to go on. Shanahan relays speculation among media members at Boston’s spring training facility that the two were in some sort of relationship outside of the professional sphere. The Red Sox 2016 media guide also listed Farrell as single, which “raised questions.” He confirmed to reporters that he and his wife of 30 years have been separated for two years and were in the process of finalizing a divorce.

Whatever precisely happened (or didn’t) between Farrell and Moran that led to her quitting is unclear, but there seems to be an established pattern of reporters getting involved with Red Sox players and managers, or at least rumored to be.

A decade ago their were rumors that manager Terry Francona was involved with NESN’s Hazel Mae, but it turned out to be bunk. Heidi Watney, a NESN sideline reporter, was rumored to have had relationships with just-divorced catcher Jason Varitek and infielder Nick Green. Watney denied it vehemently, and Varitek remarried somebody else in 2011. Jenny Dell, also of NESN, started living with Will Middlebrooks in 2013 when he was still with the team, and they were engaged the next year. Dell and Middlebrooks got married last month, on Valentine’s Day.

There isn’t much evidence of anything actually going on between Farrell and Moran, but it’s rather curious how members of the Red Sox keep getting linked with reporters over and over.

Exhibit B, also about the Moran situation from the Boston Herald:


Of course, Moran is not the first Red Sox beat reporter to be linked to a member of the team. Former NESN vixen Hazel Mae, who dated a few local jocks and eventually married retired MLB player Kevin Barker, told a sports blog NESN had no rules against dating players and that she wouldn’t work there if the network did.

And of course former NESN Sox gal Jenny Dell just married ex-Sox third baseman Will Middlebrooks. She had to quit her job when their affair went public.


First, why do they insist on linking the female reporters with people from the team? It seems you develop any sort of personal relationship, well you MUST be sleeping together.

Two, who cares? This is sports reporting, not investigative journalism. There is nothing there that can be construed as a conflict of interest. Sports reporting is about performance on the field. Having a personal relationship at most gives you greater access to the team. And isn't that what media outlets want?  Why did Dell have to lose her job? I seriously doubt Middlebrooks had any deep dark Sux secrets.

Third, even if this was some sort of conflict issue, why is it Moran has to lose her job but Farrell gets to keep his? Since this really has nothing to do with actual journalism and more to do with the salaciousness of the Boston press, why isn't he suffering any repercussions for this?

I'm especially pissed off for Hazel Mae. I didn't know about the Francona rumours. So she goes through that in Boston, marries Kevin Barker and comes here, then gets the same crap about Brian Burke? Is this some way to diminish her, to keep the boys club intact? God forbid we should treat her (or any other female reporter) as anything more than eye candy for the viewers. Nope, she's a vixen. Dell's not a woman, she's a gal. That Hazel is a great journalist means nothing, she's fodder for everyone's amusement.

There is one interesting angle to this, also from the Herald article:


The report immediately set off talk-show speculation that the Sox had leaked the story to the house organ as a means to get rid of Farrell, who has led the team to a last-place finish two years in a row, without looking callous after Farrell underwent treatment for cancer last season.


So maybe Farrell will lose his job. In a way that would be worse because that makes Moran road kill on the way to a larger plan. After all, she's a woman. Her reputation, her job doesn't matter.

This bullshit pisses me off.

NB: I'm not linking to the articles. Bad enough I had to go there to get the quotes. It's really not worth searching out.
Posted by MK Piatkowski at 12:00:00 PM