Bob Elliot is being a garbage clown 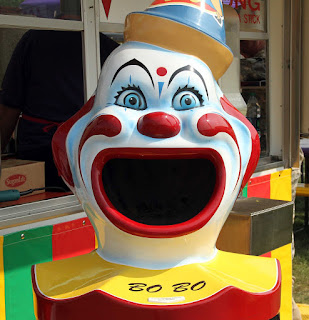 But he's a HOF writer!

It's important to note that he was inducted for his work for covering Canadian baseball, which is stellar, not for his work on the Blue Jays beat. I'm also told that he's a lovely person.

But when he writes about the Jays, he's a garbage clown.

I've noticed over the last couple of years that no matter how sunny the topic, no matter how puffy the piece, he has to end it with a doom and gloom line. Don't believe me? Look at his most recent article, Jays catcher Martin feels rotation's better, deeper. The last line?


A better group to start the season ... but better than September which had David Price and Stroman as dues paying members?

Really? You had to bring up David Price? Why can't you let it go? Why couldn't you leave it with Martin talking about how great the pitching's been - which it has?

Sometimes it blows up into entire articles, such as the one published Sunday about Edwin Encarnacion. He could have taken Edwin's statement and contrasted it with comments Atkins has made because let's be honest, Edwin might not be have the entire picture. Seriously, where has anyone said they don't want him? They're negotiating with him, aren't they? Instead, Elliot spends the latter half of the article talking about the day they clinched and how Edwin is just the most wonderful guy ever.  And again, the last line doom and gloom.


Yet, on this dreary day in Dunedin, the two seated closest to the picture for the ages — Encarnacion and Bautista — seem to be moving farther and father away from the 2017 team photo.

And quite frankly, leave off with the contract shit already. The players said the first day of spring training they didn't want to talk about it. Did you guys respect this? No! Just this constant drumbeat of crap about it when they don't become free agents until the end of the season. Guess what? There's a window after the World Series where teams can negotiate! It doesn't have to happen now!

My question to Mr Elliot is this: why? As senior statesman on the Blue Jays beat, why? Why the need for the steady drumbeat of negativity, even in the midst of win streaks and fluffy spring training pieces? Are you that desperate for clicks? Is stirring up a nest of anger really necessary? You only have to look down south to see what that can turn into.

I get you're not going to be Pollyanna but can't you let us enjoy the victories? Can't you let us have fun? Why does every single article have to drag us into the business side of baseball?

If you really care so damn much about Canadian baseball, how about celebrating Canada's team a little more? There's a connection between the play to the basest element of fandom and the decline of popularity of baseball across the board. Right now Canada is on a high. How about letting people ride it?
Posted by MK Piatkowski at 12:00:00 PM