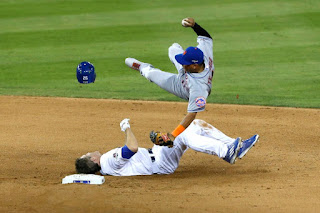 If you're a fan of baseball then at some point you've had a crush on Chase Utley.

He knows the game, he's great at the game, and will probably one day be a great teacher of the game.  (Provided the $115 million he has earned playing it doesn't deter his motivation.)

I think $115 million would probably deter me from 8 hour bus rides across the American Southwest. But from everything I've read Chase loves the game enough that he has discussed furthering his career as a coach.

Why are we talking about this?


Well, Chase went in hard to second base last October in the playoffs and manged to get baseball to rethink a rule that has been in place for about a hundred years. Traditionally if a runner is going into second and there's a close play, or a chance at turning a double play, then that meant the middle infielder trying to pivot second was fair game. This meant that the player running into second was allowed to aggressively slide into the infielder as long as the runner could make contact with second base.

If you've seen the footage from last October and I'm sure you have, then you know Chase Utley went into second hard as fuck. Hard enough to snap Rueben Tejada's leg. The contact to me at the time looked fierce but fair. Most people I've spoken to don't agree, but they're wrong. Baseball has allowed the hard slide forever, so it was legal. Most Jays fans will remember Bill Madlock's barrel roll into the lithe Tony Fernandez that cost him an elbow and the Jays a chance at the 1987 World Series.

But regardless of your thoughts on either slide now the rule has changed.

So where the fuck am I going will all of this?

Hang on while I take a sip of this delicious Rum.

Under the new Rule 6.01(j), a runner will have to make a "bona fide slide," which is defined as making contact with the ground before reaching the base, being able to and attempting to reach the base with a hand or foot, being able to and attempting to remain on the base at the completion of the slide (except at home plate) and not changing his path for the purpose of initiating contact with a fielder.

• A runner sliding into second has to make "a bona fide attempt" not just to slide into the base, but also to "remain on the base."

• Runners will not be allowed to change their "pathway to the base" in the middle of a slide to break up a double play.

• Baserunners can no longer use a "roll block" on an infielder to break up a double play. Essentially, that means they can't start their slide in midair and make contact with the infielder at or near the knee, with either a leg, arm or the body, before they've made contact with the ground.

• Finally, because of these new safety measures, MLB and the union have agreed to allow umpires to more strictly enforce the "neighborhood play" and use replay to review that play for the first time.

*Me now, even after all these tweaks there is still argument on how to employ the "neighborhood play" so things can still change.

Now, here's where the Jays stand to benefit:

Last year the Blue Jays finished 17th in MLB in Double Plays turned, averaging 0.87 per game. A little worse then middle of the pack.

But when you factor in that the Jays fielded one of the worst defensive shortstops's in MLB for 69 games (Jose Reyes), and the slow footed Steve Tolleson for 19 games at second, you can understand how those numbers could be in line for a huge upswing.

Depending on what fielding metric used, Troy Tulowitzki ranked anywhere from 2nd to 5th defensively in 2015 and Ryan Goins accumulated 1.7 DWAR in an abbreviated season.

With the new rule in place, middle infielders like Tulo and Goins will have more time and space to turn the majestic DP's that we all know, love, and have become accustomed to. Happ, Dickey and Estrada were all among the top 77 pitchers in baseball in inducing ground-balls. Double plays aside, this bodes well when your team is one of the most talented defensively up the middle in all of baseball. Factor in the new dirt infield that will slow up ground balls that much more, thus increasing the range of Tulo/Goins and you can see why I am excited about the prospect of an improved team defense.

Who stands to benefit the most? Well arguably that would be your team Ace Marcus Stroman who pitched to a cool 4.17 Ground ball to Fly ball rate. Now obviously his 2015 is a small sample size but we can all agree that he's the best pitcher on the staff. So add in that he seems to be getting more ground ball outs, now has a slower dirt infield and the team has improved the defense of its middle infielders? It seems to bode well for the Blue Jays.
Posted by formerly the smasher at 12:00:00 PM