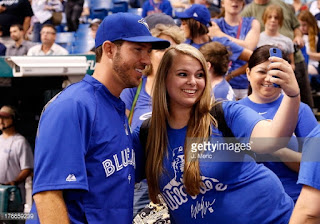 After opening the Grapefruit League season playing against his old team, JP Arencibia opened up to the Philly press about his struggles with anxiety while he was a Blue Jay. Big League Stew wrote about it the next day, where author Mark Townsend disclosed his own battle with anxiety. JP then went on the Blundell show (of all shows, why?) and talked in more detail, which then sparked this article on Sportsnet.

Was I the only person who saw him lashing out at Zaun Cherry as a cry of pain, of betrayal? Zaun had called him his padawan when he first started broadcasting and had been his mentor coming up. Did Zaun not think his act wasn't going to hurt? (Actually, probably not. He approves of physical abuse for rookies.)

All you assholes that dumped all over him when he was here, have the guts to listen to the interview. Players are human beings. Your actions have consequences. Major league players are not video avatars and it doesn't matter how much money you have, shit like this takes a toll.

It's not like he did something horrendous besides suck at baseball. Ask people in this town about his charity work. I have never heard of him being a dick to a fan. He was the first player to volunteer for a Jays outreach event. Hell, he did a solid for the Jays representing them at this:

There was no excuse for what he went through. Specifically, how this fanbase turned on him. There's a way to acknowledge a player is struggling without being abusive. There's a way to be supportive without condoning a sub-par performance. We did a much better job with Ricky Romero. Was it because he was attractive and popular with the ladies? I suspect that had a lot to do with it.

We can do better.

And I can't believe I'm actually agreeing with Blundell on something.

Related, Stacey May Fowles pointed me to this piece about what the Erin Andrews case reveals about how women in the media are treated. This is exactly why the commenting guidelines talk about not objectifying people. I want to be part of the change and I'm pretty sure this community is with me on this.
Posted by MK Piatkowski at 12:00:00 PM