It's hard to let go 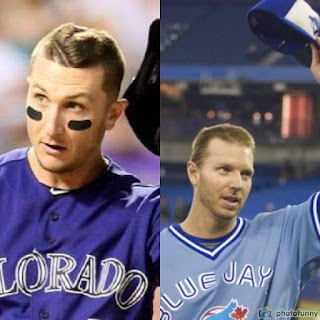 I've spent a bunch of time on Purple Row since the Tulo trade. Remembering what it was like when Doc left, I've been fascinated in watching their mourning process.

For an ex-player, they've written about him a lot. During the playoffs they were (mostly) rooting for us while commenting how happy Tulo looked. And when Tulo did a couple of interviews with Ken Rosenthal and Bob Nightengale at the beginning of spring training it sparked a few more:

I highly recommend reading all the articles and comments, but the last piece is the most interesting one. Matt Gross, the author, has been the most visibly heartbroken Tulo fan at Purple Row. The article is definitely worth a read but what really caught me was something he said in the comments:


Your heart is in the right place, but the problem for me is that ever since Tulo signed his deal that was supposed to keep him here for life, he was always about the future to me. I just wanted to see Tulo and the Rockies play meaningful baseball together late in the season in that stage of his career. Five years ago, I never could have imagined that we wouldn’t get even one late summer run of fun with that group. All of the losing was brutal, but what kept me going is I believed that there was a season in the future where we would get to see it and it and all the losing we had to endure to get there would make it that much sweeter.

So for me, this is less about letting go of the past and more about not getting to embrace a future I was so desperately looking forward to. I’ve always had an eye on the future. It’s what’s kept me going for the last five years. But I just can’t get as excited for what’s on the horizon now as I once did, and the Rockies winter of further sub optimizing that future only makes it more difficult.

That pretty much sums up how I felt about Doc. That longing to see him in the playoffs pitching for us. How hard it was to watch him kick ass for someone else. I can certain relate to Matt's pain. May he not wait as long to have that burdened removed as I did.

Matt's in the minority though. Most people agree with Connor Farrell (my sympathies for your unfortunate last name), the author of the Taylor Swift piece says in it:

There's also a lot of people upset, even angry about the spring training being a country club comment. Only one (DenverBears) got it though:


I kind of read (it) as Tulo trying to put a positive spin on the craphole that is the Blue Jays training facility in Dunedin.

Of course, we know the piece they're missing. They don't know how much of a big deal the shitty Toronto press corps has been making about him being unhappy. How many bullshit trade rumours that supposed unhappiness had set off. Tulo had to address it and had to put a good spin as possible on being here.


Can we find another Toronto Blue Jay to obsess over? ‘cause I’m tired of hearing about this particular one.

In case you haven't read it yet, I strongly suggest heading over to Hum and Chuck and reading her latest. A hearty amen from me for everything she says. It's something we need to talk more about.