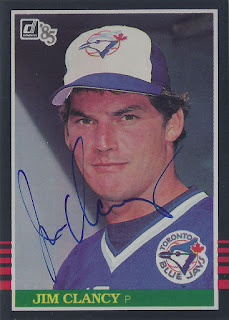 The man could pitch.

The debate about the pitcher of the 80's may or may not still rage. Not here. Stieb was the shit...Morris was a jackwad ...um except for the SSS's of the 1992 season and his one year stint of colour analysis.

The point of this poorly written article is to focus on unsung Blue Jays...So if Stieb was Avis..James (from here on in referenced to as Jim) Clancy was Hertz.

I'll pause for a second while some older members explain that outdated reference.

I sing the praises of a pitcher who is woven intrinsically into our fabric as a franchise ...yet forgotten.... 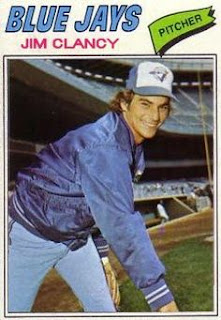 
He was selected by Texas in the fourth round of the 1974 amateur draft. Toronto, needing warm bodies selected Jim sixth overall in the November 76 expansion draft....side note: Fuck you very much Texas... you let us have him and Tom Henke...(compensation for signing Heathcliff). Yeah, yeah, Micheal Young....I still think we got the better end of things.

As you'd expect the first few years were "dicey" .

From here on I'll take more of a bullet list approach....I'm lazy and also too drunk to form proper sentences.

Up until this point you may, or will, or should accuse me of stat vomit. Fair point...The 85 Jays made me a TRUE baseball fan. So from there on in I took greater care in following the team...and thankfully for you guys it's brief. 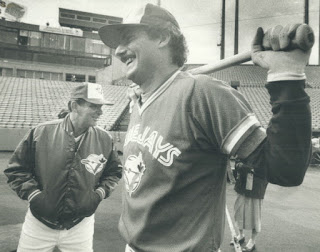 1988... Yuck...the last season with the Jays and not a great one....Jim was even relegated to some BP duty that year and then granted free agency.

From 89 to 91 Jim was primarily a BP arm with both the Astros and Braves and even seen post season duties in 1991 winning a game in the WS in relief. He signed with the Cubs in 1992 but retired before the season started.

To sum up....Jim Clancy wasn't Doc or Sir David but his name is peppered all over this franchise's pitching leaders lists. The dawn of the home satellite age allowed me to view many of his starts from 86-87 and I enjoyed watching him pitch immensely. Little ...(actually nothing) has been heard from Jim since he retired and he has never been spotted at any alumni functions or ceremonies.....Somehow I find this adds to the mystique.

He was a bulwark of our SP staff for a decade ...and yet not ever given his due.


For those of a more rocking bent...