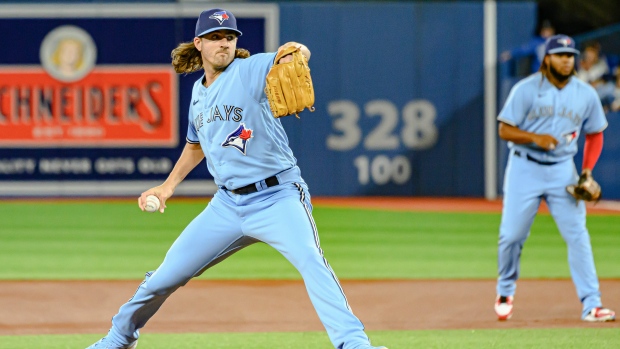 The Blue Jays just completed their toughest stretch of games, both in terms of length (20 days between off-days) and strength of schedule (faced Boston and Houston x2, the Yankees and the Indians). They started the stretch of games by taking 2 of 3 at Fenway Park. The Blue Jays got a big scare when George Springer was hit by a pitch. His big reaction was probably for two reasons. First, it hurt. Second, the Blue Jays were due to play Houston in under 48 hours and Houston was playing in Toronto a week later. Springer missed all 6 games against Houston last season due to a quad strain. Thankfully, he returned to the lineup in the second game of the series in Houston as DH and was in the field the next night. Toronto beat Houston 2 of 3 with Springer doing damage offensively against his former team. The Blue Jays then returned home and won 3 of 4 against the Red Sox. Toronto beat Houston 2 of 3 again for their first season series win and the all-important tiebreaker. The Blue Jays concluded the homestand with a trio against the Yankees. They saw their streak of winning series come to an end after dropping the first two games of the series, though the second game was highly controversial (more on that later). The stretch of games ended with a 4-game series against the Guardians (formerly known as the Indians. . Looking at the week ahead, the Blue Jays continue the road trip with a brief 2 game stop at Yankee Stadium, followed by a weekend set at Tropicana Field in Tampa Bay after a second off-day in 72 hours. Here are ten random thoughts from the last 3 weeks of the MLB,

1. The Blue Jays have been fortunate with injuries thus far this season. They are a bit short for lefty relievers with both Ryan Borucki (finger blister) and Taylor Saucedo (oblique strain) on the IL. For Borucki, it has been a frustrating start to the season. He missed the start of the season with a hamstring strain and was right back on the IL after just 2 appearances with the finger blister.  Borucki returned for Saturday's 2nd game of the double header throwing an inning and giving up a pair on runs on 2 hits and a walk. Nate Pearson is progressing as he builds back up after recovering from mono. He has been throwing bullpen the past week. Cavan Biggio has cleared COVID protocols after experiencing symptoms back on April 25. Teoscar Hernandez returned to the lineup for Saturday's 2nd game of the double header. He was 0-3 with 2 strikeouts. Hyun-Jin Ryu could join the rotation soon. He had a rehab start Saturday. Ryu's spot in the rotation is secure for now given the struggles of Yusei Kikuchi as a 5th starter and having Ross Stripling as an opener is not ideal. Danny Jansen (oblique strain) has resumed baseball activities and could start a rehab assignment soon. Among the walking wounded are George Springer, who gave the Blue Jays a big scare after getting drilled by a fastball against Boston on April 20. He missed the next 2 games and DH'd upon his return the next day. Lourdes Gurriel Jr. has been battling a tight hamstring. The Blue Jays have managed his injury with days off and games as the DH.

3. The Blue Jays have had it rough when it comes to the umpiring, but last Tuesday may have set a new low for blown calls. At the start of the 7th inning, Giancarlo Stanton reached on a throwing error by SS Bo Bichette. Vlad had to stretch for the bad throw, pulling him nearly off the bag. The umpires withheld the safe call after a review, despite a couple of review angles appearing to show that Guerrero Jr. had managed to keep his foot on the bag. Later in the inning, Marwin Gonzalez was allowed to score despite appearing to be way outside the baseline during the run down. Even if he was within the base path, replays showed that Vlad clearly tagged him out. Because the Blue Jays lost the previous challenge, they could not challenge the call, which would have been the second out of the inning. The first call meant that Adam Cimber might have pitched differently to Josh Donaldson, who hit an RBI double. It's important to get these calls right, especially since the umpires have the benefit of replay, whereas a decade ago they did not.

4. The Blue Jays have proven they are legit Worlds series contenders. This was not an easy stretch of games. They had not beaten Houston in a season series since 2016, which was also the last time they won a series in Houston (they took 3/4 August 1-4, 2016 in Houston). What's been encouraging is the Blue Jays winning 1-run games. Pitching has had a lot to do with the early success. Kevin Gausman has been outstanding in 5 starts and has yet to allow a home run or walk a batter. Adam Cimber has credit for 5 wins and is challenging the record for wins by a reliever (20). Tim Mayza has been doing a competent job when called upon to get lefties out. Alek Manoah has continued his success from last season.

5. One area of concern is the hitting with runners in scoring position. The Blue Jays have been brutal at it. In the two losses this week, the Blue Jays were a combined 2-19 with runners in scoring position. Good teams can beat you in multiple ways. The Blue Jays in recent seasons have been far too reliant on the long ball. I know this will get a lot of criticism, but the Blue Jays need to find ways to manufacture runs. If that means sacrifice bunting to move a runner or two up a base, do it. Yes, it will mean that there is one less out to work with, but it could lead to an extra run or two, especially if the next man up is George Springer or Vlad, who are known to be good at driving in runs.

6. One rule that remains from the two pandemic seasons is the invisible runner on second innings. So far, the Blue Jays have had just 2 games go into extra innings. They are 1-1 in extra inning games this season. They were walked off by the Astros and walked off the Red Sox two days later. With the strength of the bullpen, the Blue Jays should have the advantage in most extra innings games. The traditionalist in me would like to see extra innings begin with the bases empty, but with the emphasis on pitch counts, we may never see baseball return to the good ol' days.

8. There was history in baseball last Wednesday with Kelsie Whitmore making a relief appearance for the Staten Island Ferry Hawks, becoming the 1st woman to pitch in an Atlantic league game. Three days prior, she made history as the first female to be in the starting lineup in an Atlantic League game. Whitmore started in LF that game.

9. Miguel Cabrera continues to put himself in rare territory in the MLB record books. He is now one of 3 players in MLB history to have 600 doubles, 500HR and 3000 hits. Hank Aaron and Albert Pujols are the other sluggers in that elite list.

10. Blue Jay of the Week: Kevin Gausman. The Blue Jays won all 4 of the starts Gausman made in this extended stretch of games with Gausman getting credit for three of the wins. In the 27 innings he pitched, Gausman walked just one batter (his first walk of the season).He allowed 4 earned runs (he also allowed on unearned run for 5 total runs allowed), 23 hits and struck out 32 batters.

Bonus thought: I almost forgot to wish all you female JITHer's a very happy mother's day.