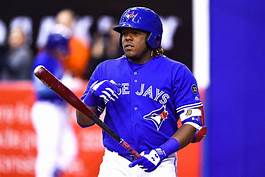 Vladimir Guerrero Jr. drove in the winning run in the 4th innning as the Blue Jays edged the Yankees 2-1

After a blowout loss to the Yankees yesterday, the Blue Jays were looking to avoid being swept for the first time this season. Lefty Andrew Vasquez was optioned to AAA-ball. Infielder Kosuke Katoh was DF'A'd. Righty Casey Lawrence was recalled from AAA-ball. Yusei Kikuchi got the start with Tyler Heineman behind the plate. George Springer got the half day off with Bradley Zimmer in CF. Vinny Capra got the start in RF. Could the Blue Jays avoid being swept and end the home stand with a win? Here is tonight's game recap.

Email ThisBlogThis!Share to TwitterShare to FacebookShare to Pinterest
Labels: game recap, New York Yankees
opinionator777
I am a graduate from SFU with a major in psychology and a minor in Health Sciences. I am a huge advocate for children w/ Special Needs. I'm a huge Canucks fan. As well I love watching baseball in the summer. I have an 8-year-old Havanese-Shih Tzu
Newer Post Older Post Home