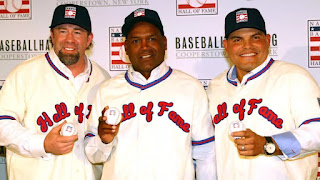 It's that time of year again. The 2018 BBWAA HoF Ballot is out now, and I know I said this last year, but once again it is way overcrowded (at least IMHO). There are 33 names on the ballot this year, which can be found here with some handy dandy stats on it. Depending on how big you like your HoF, you can probably make a case for 20ish of the 33 candidates. There's a catch though. There are only ten slots on each ballot. Yikes. Let's get into it after the jump, shall we?

"Voting shall be based upon the player's record, playing ability, integrity, sportsmanship, character, and contributions to the team(s) on which the player played." Never, ever in the history of humanity has a 23 word statement set off such a cacophony of heated exchanges (twitter or otherwise), spilled ink, and outrage, but here we are in the "post-PED" era.

Joe Morgan has now weighed in and asked the BBWAA voters to block PED users from the HoF. This to me, just adds further confusion, outrage, and general nastiness to the process. Which PED users are we talking about now? The known ones? The suspected ones? Damn the lot of them from (pick a year) forward? In my eyes it's just another shade of gray being added to a process that's already thick as pea soup fog with gray.

Voters are going to vote their conscience anyway, so why are we piling on to an already hopelessly political situation? In short, the rules are so damn vague that any ballot is possible. If a BBWAA member really wants to mess with peoples' heads, he/she will submit a ballot with only Jason Isringhausen's name on it this year, or the ever popular blank ballot. Jason Isringhausen was a serviceable relief pitcher, who managed to pitch for 16 seasons, despite all kinds of arm troubles, but he's nobody's idea of a HoFer.

It is frustrating, to say the least, but this is where we are now. So much animosity over something that should be a joyous occasion for those that are worthy that get the nod and their families and friends. Instead of celebrating the guys that make it, we bemoan those that are not there, whatever the reason for their non-inclusion. To be fair, the writers have dropped the ball on numerous worthy players over the years (again IMHO), and that only adds to the frustration. So how do we get past this?

I think the only way forward unfortunately is to carry on status quo and have the BBWAA members vote their conscience. It sounds like a copout, but if we want to keep everything vague (and there's value in that as just arbitrarily knocking people off the ballot seemingly willy nilly is even more troublesome as far as I'm concerned), it's probably the most amicable option left.

So where's my conscience in all this? My choice is to look at on field accomplishments only. I respect the opinion of those that want to wade in and sort out who did what and vote based on that, but to me that takes on a bit of a witch hunt flavour, and in my opinion if one worthy player is kept out because of suspicions that he did PEDs when in fact he didn't, that's one too many. Put 'em all in (those that are worthy by what they did on the field), or keep 'em all out I say. Since we've already begun to put players from the era in question into Cooperstown, let's continue to do so, even if we have to hold our nose with some of them.

If you're determined to have a "clean" ballot (i.e. free of known/suspected PED users) might I suggest knocking off Barry Bonds, Roger Clemens, and Manny Ramirez, and adding Vladimir Guerrero, Andruw Jones, and Johan Santana. That still leaves Trevor Hoffman, Jeff Kent, and Billy Wagner off, which is a problem to me. In my mind, it's a problem that can only be solved by temporarily either expanding the ballot or making it an unlimited ballot. After all, a HoFer is a HoFer right? Some voters would still only vote for one or zero with an unlimited ballot, because they can.

Regarding Trevor Hoffman and Billy Wagner, in my mind they're either both in or both out. You can't have one without the other. Hoffman's career had the volume, but was not as dominant as Wagner's, which was much more brief. Both have value. Wagner has the great peak argument on his side, and Hoffman has the excellence for a long period (21% more IP than Wagner) argument on his. The disparity that we see in their respective vote totals is bizarre to me. The only thing I can ascribe it to is Hoffman's perceived character, but that's not enough to sway me that that is worth 74.0% to 10.2%. C'mon BBWAA, get it together.