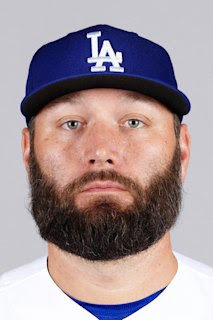 The big X factor heading into spring training for the Blue Jays will be the health of starter Aaron Sanchez. Sanchize had a disastrous 2017 campaign missing the bulk of the season with a troublesome blister on his middle finger. In his absence, Joe Biaghini pitched in his spot in the rotation. While I think Biaghini is a good pitcher, he is better suited for the bullpen. In several of his starts, Biaghini was inconsistent and rarely went more than five innings. The Blue Jays need to sign a free agent starter who is proven and reliable. Lance Lynn would be a perfect pitcher to target.

In 21 of 33 starts in 2017, Lynn pitched into the 6th inning. The Cardinals starter had a record of 11-8 with a respectable 3.86 ERA, 78 BB (2nd in the NL) and 153K. On May 23, Lynn went into LA and pitched 8 strong innings allowing just a single run on 2 hits, 2 BB and 10 K. We're talking about a Dodgers team that absolutely dominated the first half of the season and practically never lost (yes Lynn did lose the game that day but come on he had no run support). Another game that stood out for Lynn in 2017 was September 2nd when he 1-hit the Giants over 8 innings while walking 4 and striking out 4. It's these types of games that save the bullpen, which you need if you're going to survive the season and still be contending in September.

Why the Blue Jays should pass on signing him

Lance Lynn missed the entire 2016 season after undergoing Tommy John surgery. Yes he made every scheduled start last season, but there's always a chance that Lynn could re-injure the elbow or suffer an injury to a different body part. I think the Blue Jays would be wary of his pitch count, given the elbow injury.

Lance Lynn will be coveted by several teams, given the available pitchers in this year's free agency pool. Last season, Lynn made 8.5M. You can bet the Cubs, Red Sox or Giants would be willing to give him in the 16-20M range.

Toronto has a solid rotation anchored by one of Sanchez or Marco Estrada. Marcus Stroman and JA Happ are no slouches either and will give the Jays a quality start more often than not. Money wise, without signing Lynn, the Jays are likely to be spending 60M on the aforementioned starters with Sanchez and Stroman yet to be signed. There are cheaper options out there who will be comparatively effective. However, those other options (Tyler Chatwood, and Jason Vargas, for example) can just as easily turn out to be Francisco Liriano from last year, who was ineffective and traded to the Astros where he faced 2 batters total in the World Series. To me, Lance Lynn is worth the price.

Email ThisBlogThis!Share to TwitterShare to FacebookShare to Pinterest
opinionator777
I am a graduate from SFU with a major in psychology and a minor in Health Sciences. I am a huge advocate for children w/ Special Needs. I'm a huge Canucks fan. As well I love watching baseball in the summer. I have an 8-year-old Havanese-Shih Tzu
Newer Post Older Post Home