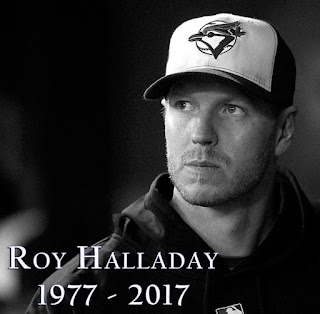 Having been out of town for the past week, I've had plenty of time to mull over my thoughts about the passing of Roy Halladay but haven't had the opportunity to fully articulate these thoughts onto paper, so-to-speak, since I only brought my Blackberry with me to D.C.

After some reflection, I must say that I've been feeling more than a little skeeved out with Doc's death. Perhaps it'll help to put things in perspective by laying out a little background history of my baseball fandom to explain why I feel so.

My earliest memory of watching baseball was during the 1971 World Series when my father told me that this Roberto Clemente fella was someone I needed to watch as he did everything so well. I was six years old and I remember bits and parts of watching this series where the great Clemente was named the MVP for the victorious Pirates, but I didn't really understand baseball or what made Clemente so special back then. It was, of course, the next year that Clemente passed away in a plane crash at the age of 38.

It was in 1975 that I truly became a fan of baseball and I'd hear my father rave about this catcher for the Yankees, and I became a huge fan of Thurman Munson, especially during his MVP season in 1976 and the three post-season appearances in a row from '76 to '78. I started a scrapbook collection with newspaper/magazine articles, box scores and photos of Munson in 1976 that lasted until his death on August 2, 1979. I still have the three scrapbooks covering four seasons in a box at home.

In my lifetime, there have been four players in particular that I had special father-son bonding moments. I grew up with my father highlighting two players that I just had to watch (Clemente and Munson), and I went on to take my youngest Things to ballgames where I'd highlight two players in particular that they just had to watch and emulate. One was Doc, who was the pitcher for Thing 3's first (and second and third) ballgame - that first ballgame was the May 12, 2009 game where Halladay dominated against A.J. Burnett in the latter's return to the Rogers Centre as a Yankee. The other is a recently-retired Jay who is now enjoying life fishing on a lake, a player that I took my two Things to several games and helped them understand what they were seeing was special.

So, you can see by now where I'm going with this and why Doc's passing has me feeling rather unsettled. Three of the four players that I've had special father-son bonding moments in baseball have passed away in the same manner.  It leaves a sickening feeling in my stomach.  A coincidence or ... holy shit, what?

(The only other major baseball-related father-son moment I've had was when we saw my dad's favourite player from his youth at a book signing in San Francisco for Mickey Mantle's "The Mick", but this took place perhaps twenty years after Mantle's retirement. I still have the signed copy of the book here at home.)

I've seen Doc pitch in person perhaps 25-30 times and my three favourite memories of these games:

1. The A.J. Burnett return to Rogers Centre. I've already mentioned this one as it was made more special by this being Thing 3's first MLB game. I also particularly enjoyed this image from this game: 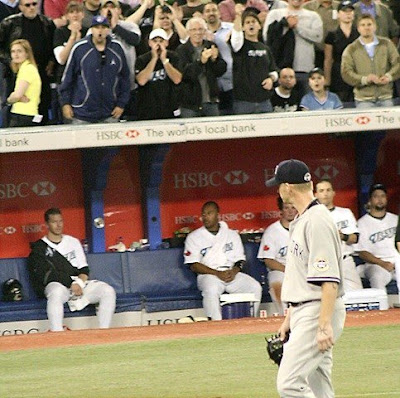 There's so much to take in from this image.
2. Doc whipping the Red Sox at Fenway Park on July 17, 2003.  Boxscore here.   I had bought tickets to this game a couple months prior but I didn't expect Doc to be pitching as this was two days after the All-Star game, but as it turned out, he didn't pitch in the ASG so he was available to go while I was there in attendance. A complete-game for Doc as he won his 14th straight decision in out-dueling Derek Lowe who had won 7 straight decisions himself.

3. The first time I got to see Doc in person - a two-hit shutout of the Colorado Rockies on June 7, 2002.  Boxscore here.  Bonus - got to see Larry Walker in person, as well.

Another favourite memory was watching Doc as a fuzzy-cheeked rookie toss a near no-hitter in his second MLB start. This video is fascinating to break down - the fresh young face, the overhand pitching motion, a different uniform number, etc.

Life really can be unfair sometimes. Brandy only got to have four years with him being home for more than half of the year. Doc won't get to see his son Braden toeing the rubber in the big leagues in a few years, nor would he get to see both Braden and Ryan grow up into adulthood. Meanwhile, plenty of asshats and pieces of human excrement out there continue to live.

While in D.C., I had a conversation with some baseball friends about Doc's passing and why he meant so much to a lot of people, why this hurt more to more people than the passings of, to give some examples, Yordano Ventura, Jose Fernandez and Oscar Tavares.  The best comparison I could give was to imagine if something had happened to Frank Howard a short time after his retirement and the Senators still being important in town - he's that well-liked in D.C.  (Another comparison would be Ryan Zimmerman for the Nationals, though he's not on the same level)  It's impossible to quantify the impact that Doc had on a lot of people -- so many ballplayers, members of the media and non-baseball people revere him for things he's done beyond performing on a mound; the loss just cannot be measured on so many fronts.

Thanks for the memories, Doc. You did your best to make the Blue Jays relevant throughout the aughts and thank you for being not just a legendary ballplayer but also an even more legendary human being.
Posted by macgyver13 at 7:51:00 AM