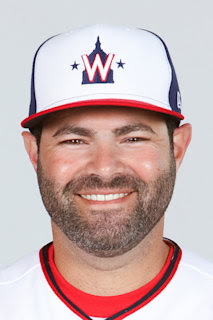 Last season the Blue Jays played 5 different catchers: Russell Martin, Jarrot Saltalamacchia, Miguel Montero, Luke Maille and Raffy Lopez. It is imperative that the Blue Jays have a reliable backup catcher. Russell Martin will turn 35 years old next year. While he will still play most of the games, the Jays backup catcher can be expected to play 50-100 games depending on if Martin is healthy. The catcher is such an important position because the pitcher relies on the catcher to call the right pitch and to help him when he needs it. Alex Avila would be a good backup catcher for the Jays to target

Two big issue the Blue Jays had last season was throwing out base runners and wild pitches. Avila has proven to be capable in both categories. Last season he allowed 5 passed balls and 16 wild pitches. He threw out 31% of the runners who tried to steal on him. A lot factors into being able to throw out a base runner from pitch selection to said pitch being executed properly. Also, how fast a pitcher is to the plate can create problems throwing out base runners.

Alex Avila made $2M this past season and with a raise the Blue Jays can get him for around 8-10M. For a backup catcher that is a reasonable price on such an important position.

As mentioned above, the Blue Jays backup catcher will be expected to play at least 50 games this season. Avila has been in the league for nine seasons whereas Luke Maile has 2 seasons where he's been with the Major league club full time. Raffy Lopez will be entering just his second full season as catcher.

Cons of signing him

Best days behind him?

Statistically, Alex Avila had his best year in 2014 when he led the AL in throwing out base runners (36) and double plays turned as a catcher (9). He also ranked 4th in putouts by a catcher (883). Offensively, his numbers last year were slightly better than would be expected based on previous seasons. Avila has never been a big power hitter and he will strike out about a third of the time. However, Avila also drew a respectable 62 walks.

The Blue Jays are at a critical point in their contending window and perhaps it might be better to have a veteran presence backing up Russell Martin. I'm not saying that Maile or Lopez aren't capable of being Martin's backup. I just think the time is now to win the World Series.
Posted by opinionator777 at 11:00:00 AM

Email ThisBlogThis!Share to TwitterShare to FacebookShare to Pinterest
Labels: 2017 Free Agency, Alex Avila, Toronto Blue Jays
opinionator777
I am a graduate from SFU with a major in psychology and a minor in Health Sciences. I am a huge advocate for children w/ Special Needs. I'm a huge Canucks fan. As well I love watching baseball in the summer. I have an 8-year-old Havanese-Shih Tzu
Newer Post Older Post Home