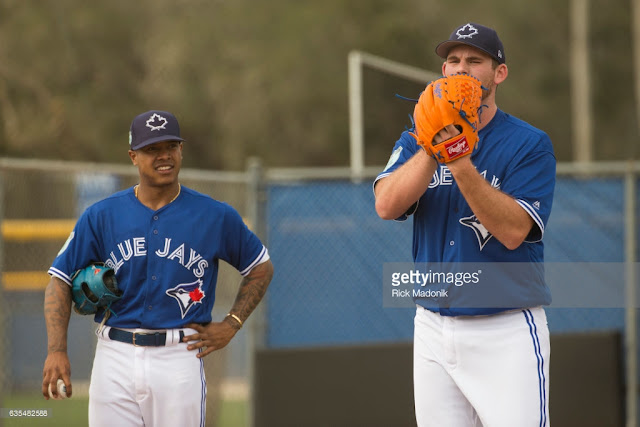 The Jay's have dropped another series to a division rival, as the Orioles set out to prove the world they could beat the Jay's even with Zach Britton unavailable to pitch.  Hyperbole alert: these upcoming two series, against the division-leading Red Sox and Astros, are the two biggest series of the Jays season thus far. Ross Atkins and Mark Shapiro should have a good read on the team and what direction they will be heading as they move into the trade deadline.

While the offense has continued to sputter, the rotation has been as good as it has been all year. They hit a rough patch early on due to pitching the likes of Mat Latos, Casey Lawrence, and Mike Bolsinger after injuries riddled the early portion of the year, but have pitched well lately as the rotation regained health. J.A. Happ has come back from injury and pitched very much like the guy who won 20 games last year. Stroman has been rock solid all year, with one or two bad starts mixed in. Francisco Liriano is back from his shoulder troubles and has the potential to shut down any lineup on any given night. Marco Estrada had a great start to the season, however, has really struggled in the month of June to the tune of a 10.03 ERA.

Aaron Sanchez is reportedly about to return soon, leaving the Jay's with a dilemma they have yet to have this season - too much starting rotation depth. They say you can never have enough pitching, and never has that been truer than in 2017 - the year of the disabled list.

Injuries are way up around the league, and no doubt teams have taken advantage of the switch from a 15-day to a 10-day disabled list. No better example of this has been the Los Angeles Dodgers, who have taken advantage of the new 10-day DL rules by shuffling their rotation to protect some of their highly talented, but oft-injured rotation pieces. Clayton Kershaw has yet to differ off his 5 man routine, but outside of that, they have given starts to Alex Wood, Brandon McCarthy, Kenta Maeda, Rich Hill, Hyun-Jin Ryu, and Julio Urias. Every one of their starters, except for Kershaw, has made a trip to the disabled list in 2017. There are other examples of teams utilizing a 6 man rotation - the Mets were currently rolling with one until Robert Gsellman pulled his hamstring running out a ground ball. The Astros flirted with the idea before Dallas Keuchel hit the disabled list himself.

With Sanchez coming back to the rotation, the obvious move would be to allow Joe Biagini to continue working out of the bullpen, as he was at the start of the year. We should however continue to allow Biagini to develop as a starter. On May 5th, Gibbons announced the move to convert Biagini into a starting pitcher. As a reliever, he posted a 3.38 ERA, 2.82 FIP, 3.18 xFIP in 18.2 innings versus a 4.93 ERA, 3.52 FIP, and 4.14 xFIP in 49.1 innings as a starter. The numbers have said that Biagini is more effective as a reliever, but I feel like 50 innings isn't enough to truly evaluate a young pitcher, after making a difficult transition mid-season. 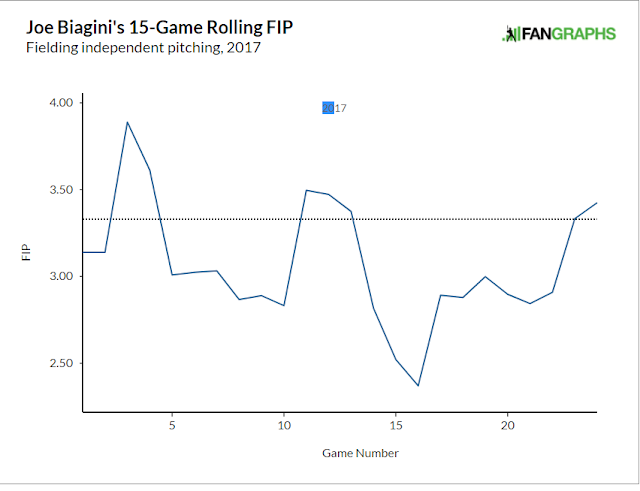 While this may not be enough appearances for a graph like this to fully stabilize, it does show me that he's had some good outings in 2017. You can find his game log as a starter here, and outside of two bad outings (5 ER in 4 IP @ Atlanta, 6 ER in 1 IP vs Chicago) he's been pretty steady. He's settled in now that he has a couple of starts under his belt at the big league level.

Looking forward to 2018, there are currently only 3 members of the rotation under club control: Marcus Stroman, Aaron Sanchez, and J.A. Happ. Keeping Biagini in the rotation now, and allowing him to develop in the role, will fill one more hole - now, and in the future. He slots in nicely as a dependable 5th starter, allowing the team to target a higher-end guy for one of the other slots via trade or free agency.

Another benefit to keeping Biagini in the rotation now is to protect against another pitching injury. If Marco's back, Sanchez' blister, Liriano's shoulder, or JA's forearm should flare up again, we could easily slide back into a 5 man rotation. If we move Biagini back to the pen, it's going to be difficult for him to be able to handle a starter's workload. That would mean going through another mix of replacement level depth starters. I have a feeling that the 6 man rotation would eventually end up sorting itself out, whether it be by injury or trade. Marco Estrada and Francisco Liriano are both free agents next year, and could easily be moved before the trading deadline. Somebody will need to fill in the rotation, and the Jays are lacking MLB-ready pitching in the organization. It makes sense to give Biagini the chance to further develop as a starting pitcher, which he was always considered before the Jays selected him from the San Francisco Giants in the Rule 5 draft.

The fact that Biagini used to be a starter helps him here, more than say, a guy like Roberto Osuna who has mainly been a reliever. In 2014 and 2015 he threw 130 innings while throwing 67 regular season and 7 post-season innings in 2016. That leads me to believe they would be comfortable with him at least topping 120-130 innings. He's currently at 67 innings, so that would allow him about another 50 innings or so this year, depending on how much they want to extend his arm. A jump from 75 to 120 sounds high, but the previous two years of a starter's workload help his cause, and he's never had a serious arm injury in his career. Those 50-60 innings remaining at an average of 6 innings per start would give him approximately 10 starts left. That will get us into September, and if he needs to get shut down early the organization can make that decision then.

I was glad to see them take the 'kid gloves' off Aaron Sanchez last year and allowed him to pitch into the post-season by being flexible with his inning count and creatively allowing him to skip starts deep in the heart of a playoff race. The 'Verducci Effect' has mostly been debunked, and there are more to managing a pitchers workload than a strict innings count. Biagini's case might be different - if they are in a playoff race, and the rotation is healthy, it might make more sense to put him back into the bullpen. However, the way they handled Sanchez's innings limit gives me confidence that they will allow Biagini's arm to dictate when they eventually shut him down as a starter in 2017.
Posted by Nego at 7:00:00 AM