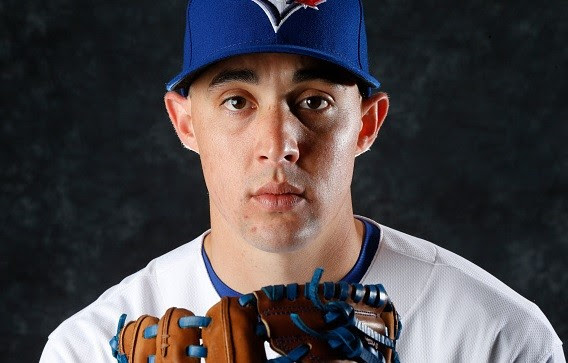 What to do, what to do?  The debate has raged for weeks now.  Aaron Sanchez--continue using him as a true star, near-ace starter.  Aaron Sanchez--move him back to shutdown 8th inning setup man.  The debate seems to have focused some on innings pitched and concern about a jump with the arm at this young stage.

In talking it out with MK, we certainly chatted about the Mets starters and what we've seen lately in the pitching outings from--setting aside Harvey and his serious injury--Syndergaard and DeGrom recently, just as examples.  The 'arm concerns' camp want to get the most value for the season from Aaron and anything that makes it safer for a pitcher to pitch his best these days is worthy of consideration.  Not to mention that in my keeper league, wouldn't I love to have (another---I have David Phelps already) a SP-eligible pitcher racking up holds for me.

But I am here to proffer a counter-argument, and it is this.  The Sanchez of 2016 is not the Sanchez of 2015.  That Sanchez was still shuttling back and forth and was moved to the bullpen after the lat muscle strain last year.  This year's Sanchez was a starter from the get-go and has been a starter all the way along.

And with that comes all sorts of things.  It comes, of course, with the mental attitude about taking the ball every 5th day and starting a game and going through a lineup 3 or 4 times.  More importantly, it comes with the physical preparation and "training" and muscle memory of the arm to pitch every 5 days for an extended number of innings.

To move Aaron into the bullpen--aren't you taking just as much of a risk in drastically recalibrating the physical rhythm of someone who's spent the whole year training themselves and habituating themselves to start? It can't be the thought that you'd bring him out of the bullpen only every 5th day or so.  My own argument is that tampering with the overall physical approach in this way may, in fact, result in an unintentional change in mechanics, and may result in a risk of physical injury just due to the change itself.

Bottom-line, Sanchez has been very efficient over his season.  His pitch count per start is at about 100, by no means unreasonable (Happ and Stroman are more or less at the same level when you take innings pitched into account).  His recent performances show no signs of dead arm or anything like it.  He seems to like what he's doing and I applaud Gibby for stating that he's leaving it in Aaron's hands to decide where to go from here.

If there really is concern, then by all means think about skipping a start or two.  But for me, Aaron Sanchez isn't a swing man, if he ever was one.  He's a near-ace who is a trusted member of my fantasy team's rotation---and that's where I argue he should stay.  Next year?  Who knows.  I don't forget about the Eckersleys and Smoltzes of the world who made the successful transition from starter to closer (Wade Davis and Zach Britton have done it too).  But to my recollection, they didn't do it in-season.  Maybe those guys had a clue...
Posted by Unknown at 9:00:00 AM