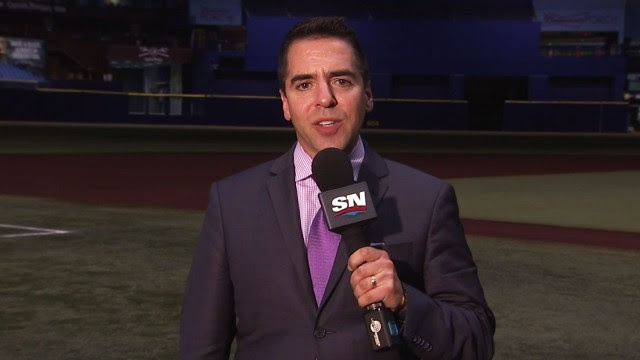 A dork: Someone who has odd interests, and is often silly at times. A dork is also someone who can be themselves and not care what anyone thinks.

There's a lot of dumping on Barry Davis here in these parts. People ask why he's needed. His manhood is disparaged because he struggled to catch a pop fly in the camera well and he's not a heavy hitter. Others hate the way he does player interviews.

Well, I'm a Barry fan and it's not just that he looks great in snazzy suits. Let's look at these complaints.

The sideline reporter is a long standing broadcast tradition. They plug sponsors and upcoming events, they do post game player interviews, and are there to deal with any breaking news (like a fan turning a double into a home run *cough* *cough*). You've all seen that scene from Bull Durham:

The players know they're going to be asked stupid questions. The interviewer knows that a player coming off the high of a winning game isn't going to have any great insights. It's a ritual we all put up. Muni interviews are an exception rather than the rule. What do you want him to ask? His role isn't to be a hard-hitting reporter. His job is to be part of the entertainment package that is a broadcast. He is the audience avatar. I like that for once that it's a man filling this role, as it's usually assigned to a woman. (Although Hazel Mae is now sharing that role with him.)

Barry knows who he is and more importantly, who he's not. He knows he's not one of those Goliths striding the field. He knows he's short. He knows that in this world he's working in, he's seen as inferior, to be laughed at. So he rolls with it, doesn't try to assert his masculinity but is comfortable in his own skin just the same. He allows the players to use him as a butt of jokes, knowing this is the way he'll be accepted. He takes his ego out of the way.

That's a pretty good description of what an audience avatar should be.

Then there's the other side of Barry which I discovered by accident. A few years ago, he used his personal YouTube account to post a few vids from spring training. I looked through the other vids and found Barry Davis, axeman. Vids of him playing in a band with his son playing drums. The vids were named "x year old plays y". His playing was solid but he wasn't looking for limelight. The other vid was Triumph in concert, which in my books shows exceptional taste. Sadly, I can no longer find these videos.

Barry strikes me as a guy I'd love to have a drink with and talk music and baseball all night. To me, that's sexy as hell.

So keep dumping on him for not being the athletic star you all are. He's got a fan in me.
Posted by MK Piatkowski at 12:00:00 PM