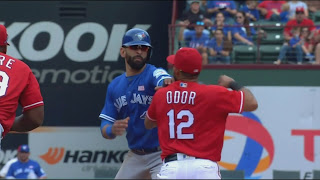 Where should one begin?

2015 was a magical year for Toronto. They were a .500 team half way through the year but then caught fire and ran away with the division. In the first round of the playoffs they faced a tough western division team in the Texas Rangers but beat them in five. The Jays went on to narrowly lose to the eventual World Series Champion Royals. Jays took them to 6 games even letting two games get away late. No other team took the Royals past five games.
It was our hardware.
Fuck!

But back to the division series, Texas and Toronto fought like dogs. Hamels and Gallardo were beasts. The Jays who had owned all the offensive categories all year round, found themselves in pitching duels. Game 5 seemed cursed, an unlucky bounce off a bat on a catchers throwback had the Jays on the ropes. You all know the rest:

Yeah click it fuckers!
At least once.
Get the Poison out.
It's pure feel-good, anti-venom.


Now in that moment I can admit I lost my god damned mind. I spilled beer, I punched my friends? (I don't know why I resort to violence in times of joy, don't fuckin tell me either you arm-chair psychiatrists)  I high fived my dogs, I threw a piece of pizza at the wall and then I shot gunned a beer. It was an historic moment. An historic homer. One that will be played by Major League Baseball over and over advertising playoff baseball for years to come. They'll include it in a clip of homers with Kirk Gibson's, Joe Carter's, Robby Alomar's, and Carlton Fisk's. You know the clip. And you know Joey's belongs in it.

But here's where I get really honest, and this is where I may piss some or all of you off.

I can understand how the bat flip angered a lot of people.

I love Joey.
Love, love, love Joey. If we don't resign him I may join Oakville's vigilante army and help him string Shapiro high from Ted Rogers statue.
I loveee Joey, and I understand his enthusiasm, it's who he is.
I don't for a second believe that when Joey tossed his bat aside like a modestly famous rapper would a Kardashian, that he meant any disrespect,

But I understand how it could piss people off.

I'm a bit of a purist. (how many of you cringed at that word?)

I prefer respect and understated celebrations.
Some will say that this is exactly what is wrong with baseball. Cue up Chris Rock.

But that's bullshit. There's plenty of room for personality.
Bryce Harper's "Make Baseball Fun Again", Archers exuberance, Stroman's excitability and even Papi's enthusiasm. There are hundreds of more players who wear their emotions on their sleeves but I'm too drunk and lazy to include them. The game is better for them.
But to me there are distinct lines that can be crossed in baseball that disrespect your opponents and the game. 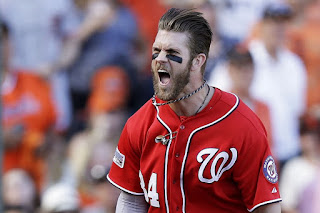 Here are a lists of things I (and probably most ball players) will fight you over: 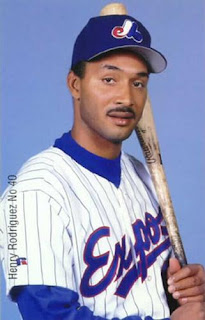 Using family, race or sex in burns.
Though I'll admit I'm guilty of one of these.
I've called many guys cocksuckers on the field in the past, but it was not meant at all sexually.
We men are complicated beings.
And I'm actively trying to retire it from my repertoire.

Standing at home after you hit a big homer off my pitcher.
Here's where I can understand some of Texas's angst.
I truly don't believe that Jose was trying to show anyone up. It was just a monumental home run after a really weird call on a deflected ball that seemed to seal the teams future.
He was just jacked.
But I get why it could anger a Rangers fan.
Which is why I/We/All/Jays, expected some retaliation.

Game was tight and from there he goes in hard to second base.
As a coach If he doesn't go in hard to second I'd be pissed.
Jose over slid the bag a bit but yet he still stayed in contact with it which is within the rules.
Stinky, who already had stared down Sanchez earlier in the game, tried to hit Jose in the face with his throw.

Of that I am completely sure.

That's true in the sense of Johnny Bench famously breaking up a DP with the top of his skull in the world series. But in everyday ball, middle infielders keep their elbows and their throws up. Everything else is bullshit noise. Watch the play again. Odor meant to hit Jose in the face with the ball and from what I've read, it may have actually glanced off him.

Then we move to the aftermath. Jose gets up understandably angry. Odor pushes him. Jose moves back towards him with open hands in what looks like he's either going to grab jersey or push Odor back. Odor suckers him with a full swing fist to the chin. Jose staggers but doesn't fall.

In flies Pillar, recklessly throwing himself into harms way, flailing at the entire Rangers infield. He and Jose are nerd circled but Pillar throws enough to keep them from getting plugged. All hell breaks loose. Our bullpen catcher ends up tagging Dyson at some point. Someone find out his name so I can name my next child after him.

All said, the Rangers fucking suck. Just a bunch of shit heels who couldn't spell cat if you spotted them them the c and the t.

Jose unsuspectingly took a full swinging savage punch. I'm surprised he didn't end up with a concussion. A testament to his toughness..

So what do you do at this point?
Do you you stand by after the dust has settled and take the high road?
Your teammate in one inning was hit by a pitch, attempted to be hit in the face by a throw and then was full-on haymaker sucker-punched in the jaw.
Do you let it go?

No you fucking don't.

I think Jessie Chavez will probably get suspended for throwing one pitch.
One pitch!
One pitch that hit a 300 pound guy in the ass!
In a game that a convicted felon Pitched and intentionally beaned someone.
A convicted felon who stole a vehicle, drove drunk, ran over a mans head and then fled the scene. That guy.
That guy who is now "rehabilitated".
Bush who can throw 100 MPH hit a guy on purpose.
"But he's rehabilitated from his Assault with a weapon charge."
Actually I'm more pissed that the Texas shit-heap club got the rookie to do their dirty work in the last game instead of manning up themselves.
But again,  Chavez who hit a 300 pounder in the ass will get suspended and Bush or Ranger team management won't. Fuck yourself baseball.

And Jose will get suspended too for walking back towards a guy who threw a ball at his head. A guy who then punched him.

And I bet out of it all, Odor get's 5-10 games.(or less)
Meanwhile Alex Reyes, probably the best pitching prospect on the planet not named Julio Urias sits 50 games for testing positive for marijuana.

Fuck it all. Fuck the Texas, Fuck the MLB, but mostly fuck the Odor.

Social Media has had it's take:

What a cheap shot on batista by odor..batista should break that punk in half.he should beat his ass prison style..week sucker punch
— Jose Canseco (@JoseCanseco) May 16, 2016

So much can be said about this Texas/Toronto brawl. The worst part of it all? THE STUPID "USA, USA" CHANT BY THE CROWD! #Ugh
— John Axford (@JohnAxford) May 16, 2016

Okay Rougned you piece a shit!