Just Turn Left - The Art of Running the Bases 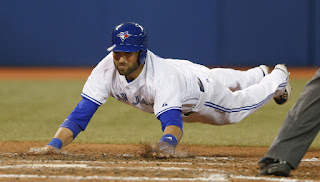 The Jays have been struggling offensively this year, of that there is no argument. They are averaging ten K's a game, the power is way down and the team batting average is woeful. If you average 180 in darts then there's a train of English ladies that will be lining up to sample your spotted dick. Average 180 in baseball and you're getting dangerously close to getting sold to the Yomiuri Giants.

But the sticks aren't all that is hurting Toronto early on in 2016. The Jays have been struggling with the most fundamentally basic of baseball skills. They have missed bunts, missed signs, booted routine grounders, overthrown bases and most alarmingly have ran the bases like toddlers on Junior Jays Day. Toronto is a veteran team, one of the older teams in the American League. Usually with that age comes experience and the skill of running the bases well. To be honest I thought it would be a strength this year as it has been in the past.

Speaking anecdotally, I have watched Edwin, Russell, Joey, Josh and Tulo in the past and thought that they were great base runners. But before I get into why I think that, we need to talk about what it means to be a good base runner. It doesn't mean you have the ability to steal 30 bases. It doesn't mean that you're the player that can score from third on a shallow fly. To be a good base runner it means that you read the ball well off the bat. You understand pitch sequences so you know when a breaking ball may be coming and you take a bigger lead. You can judge when a blocked ball has squirted far enough away to advance a base. You can tell when a pitcher has completely disregarded you at first because you rarely steal, so you steal second anyway. You know when to freeze on hard hit balls. You know when to go home from third on ground balls when you aren't forced. You know the contact play. You know how to fake out pitchers with stutter steps and juke defenders on balls in between.

Base running is a skill. A great skill that often gets overlooked by the casual fan. Toronto in the past has been blessed with some amazing base runners. When people think of a guy who hits a lot of doubles usually they don't think about how he does it. There are two types of doubles, there are power doubles and legged out doubles. Power doubles are doubles that Edwin hits. Crushes a gapper or something off the wall and saunters in to two-bag. Legged out Doubles are like Pillar doubles. He hits a single that just splits the outfielders enough that when he charges out of the box and aggressively rounds first he can end up safely at second in smoky heap of dirt and cleats.

Pillar gets a lot of legged doubles. Edwin gets a lot of Power doubles. Jose gets his share of both.
All three are excellent base runners with Edwin being one of the best, but getting the least amount of respect for it. He is excellent at reading the ball off the bat and knowing the situation and knowing his limitations. He's not a fast man but he knows when to push and when to shut it down. Again this is lost on the average fan because it's hard to notice but is an enviable attribute for Edwin.

Reads on flies to the outfield is another skill. We all remember Josh scoring on a pop that barely escaped the infield. It took balls of steel and a good understanding of the situation for him to score.

Now to stolen bases. Stealing a bag requires many small skills that make up a great skill. Most think that if a guy is fast he's a good base stealer or that he should be.

Base stealing does require speed but equally requires anticipation, situational awareness, getting good reads on the pitchers move and a good understanding of pitch sequencing. Anthony Gose is one of the fastest players in the game of baseball but he has had limited success stealing bases. So it's probably fair to surmise that he is weak at a few of these complimentary skills. The Jays don't steal a lot of bags. And that's not to say that they couldn't, I think Pillar, Goins and Tulo could steal at least 20 on another team but the Jays are boppers. And with that ideology comes the mantra that you don't run into outs when the guy behind you can go yard for 3 runs. 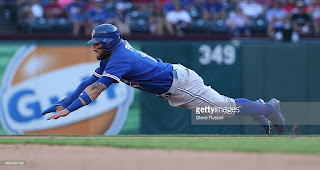 Bottom line is base running is an under appreciated skill that in the past the Jays have excelled at. This year while they have struggled with the bats early it has accentuated the value of good base running. The Jays need to be better on the paths but honestly it won't matter unless the bats warm.


*Fun Fact, I wrote this while intoxicated after our second walkoff in as many nights, so apologies for any misspellings or made up words.

**Fun Fact 2 - Some one snuck into the crypt, pulled the bats from their frigid Sarcophagus and heated them under a warm blanket of Hollandaise. Jays are now 3 in a row with blood in the waters, watch out Dodgers. 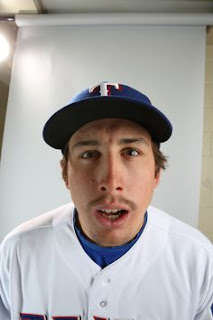