Let's take a quick look at where your Toronto Blue Jays stack up these days around on the interwebs:

MLB.com, which is a weird mix of "experts" and fan rankings (which speaks volumes to how popular the Blue Jays are outside of Canada), plunks us way down at #6, behind the Shitbirds and the Rangers: 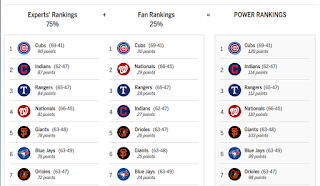 They also have the Jays atop the AL east with a current postseason probability of 79.2%, down from a season-high 87% just a few days ago..

SI.com has our boys as the best team in the American League for 2 straight weeks now, who are we to argue...?

I'll save you 28 clicks and tell you that Bleacher Report has the TBJ at #4 overall. Not bad.

Yahoo! is a great site for Fantasy Sports (sorry JITH Roto League, CBSSports.com is terrible in comparison),  but just last week they had us as low as #9 overall, which is a joke. #6 this week, behind the Shitbirds and Clevelanders, still too low, IMHO.

FiveThirtyEight has us at #3 overall!

Some days I feel almost bad for our opponents, at least against Sanchez, Happ and Estrada, facing a lineup with 7 All-Stars, including JB (is he really still batting leadoff?), EE, Tulo and Dosh, while other days I feel we should just DFA RAD, wonder whatever happened to the Stroshow, and focus more on getting on base and much less on the long ball (and K's).

It's gonna be a heck of a ride folks. We only need a few things to fall in line to be part of the Fall Classic. See you in October!