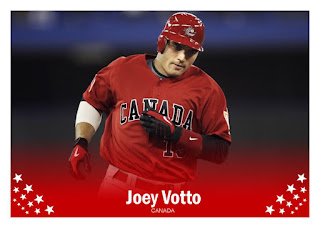 This is a probably a pipe dream.

I can't deny that with a player of his magnitude and contract, that it would be a very difficult negotiation. But as we have all seen countless times in baseball, the most untradeable assets get traded, the most untouchable contracts get touched.

I sent a tweet to Andy Stoeten about why I thought the Jays should Claim him. We had a bit of a back and forth over the Twitter where I thought I stated the Jays case fairly well. He argued the points for the first little while and then decided to climb up and die on the hill --- “Passport”.

As if by saying that it would undo all the reasons why it makes sense for the Jays to pursue him in claim & trade. Yeah I know he's Canadian. I won't lie that I like that about him but it's probably his least redeeming quality. He hits, hits for average, hits for power, walks and is always amongst the leaders in OBP. Check this chart of MLB active leaders in stats: 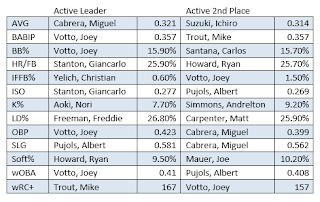 He's a smart base runner, not unlike Edwin. He won't steal many bases but he knows when to pump for an extra bag. He has been reported to be a gym rat, always working, toning, trying to improve his body, swing and motion. On defense he's a little below average, most of that comes from short range but he can scoop em with the best of em. And to be honest, with Travis, Goins, Tulo and the Rainmaker we are already tighter than Sandovals belt after post game pops.

Me: We could use an upgrade over Smoak – Andy : Passport.

Stoeten is nothing if not stubbornly infuriating.

Coincidentally he wrote a large post the next day about why he thought the Jays pursuing Votto was silly. I linked it here.

The biggest drawback to a Votto claim is the length of his contract. The salary per season to me is quite fair but obviously the term is the true risk. Players historically do not fair well after 35. David Ortiz is a baffling outlier to the rule. I thought for sure his value would depreciate because his body has always been pearish to be polite. And there are statistical links between body type and longevity.
But for the most part players with bad bodies despite superior talent start to heavily decline after 35.

That's where there's some good news on Votto's contract, or let me rephrase, reason to be hopeful. Yeah the current deal pays Joey until he's 40 but Votto is also an absolute specimen. He could eat a bag of M & M's and shit biceps. 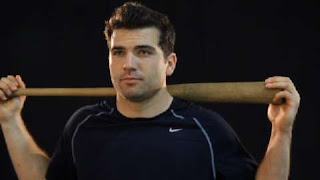 Call the vet cuz those pythons are sick! 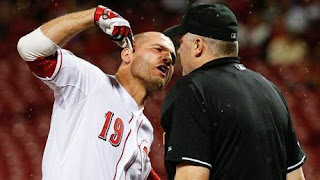 He's got a wooden dick. 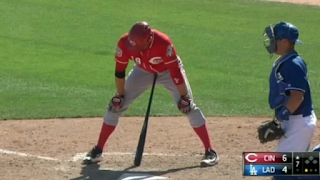 His spray chart looks like a Super-8 duvet cover under black light. 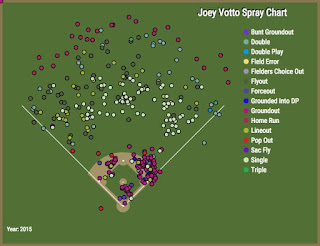 He has a shit ton of power but is also unselfish enough to choke up with 2 strikes. 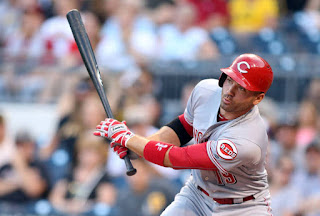 He ain't above educating stupid fans, even his own. 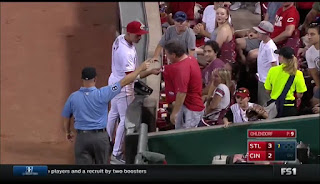 Those digits are insane.

In his career he's garnered MVP votes in every full season he has played.

One of the two outlying years was his first season in the league.

He finished second in Rookie of the Year voting that year.

Votto is more myth than man. He is a pure student of the game. He studies hitting, pitchers, pitch frequency and even umpire tendencies. Google Joey Votto infield popups and you get all kinds of awesome trivia. He's had more games getting on base 4 times than games he's hit an infield popup. He went an entire season (2010) without hitting an infield fly. At one point he had went 3000 at bats with only pulling one ball foul into the stands!

Crazier still he remembers when he did it:

I was stunned when Votto told me that. We were talking about pull hitting last Friday because I was intrigued that he had not hit a home run to rightfield all year. (Lo and behold, he smacked a Wandy Rodriguez breaking ball into the rightfield seats about two hours later.)

A Cincy blog argues why he could be moved despite his big ticket linked here. Jays are mentioned as a possibility.

Does hanging onto 8 more years of Votto for 175 million dollars make sense? He's 32 and his value will never be higher, in fact it's regressed a bit despite currently hitting .307/.433/.516. And that OBP currently leads the league. Yet, I'm talking about how he's regressed? A testament to how prolific he has been throughout his career.

So, if you'll allow that the Reds would be motivated to get out from under $175 million then what would it take for the Jays and Reds to come to an agreement?

There are probably a great number of possibilities, here are a few that I think could make sense:
1) A claim by Jays where the Jays give a few lower level, high upside prospects. But the Jays eat the entire deal. (Young power arms like Perdomo, Rios, Espada)

2) A claim where the Reds eat some money, say 5 million annually and get higher level, higher ranked prospects. (1 or 2 of guys like Harris, Tellez, Greene)

3) A claim where the Reds eat the scary years, send Votto and 50 million to cover the age 38-40 years but then get the pick of the proverbial prospect litter. This would make sense from both sides.

Reds could appease the fan base by strutting out young studs like Vladdy, Alford or Urena.

Jays would get one of the best left handed hitters in the game and not have to worry about the 38-40 lean years. Would it sting to lose one or two of those young studs? For goddamn sure.

But "prospects will break your heart" and the Jays would own the best infield on the planet for the foreseeable future.

I give the odds of a Votto claim less than 10 percent. But if you sit back and think about it, it really makes sense for both teams. Toronto is a legitimate Word Series contender. Something they haven't won in over 20 years. The Jays are also staring down the double shotgun barrel of losing free agents Bautista and Encarnacion. This move would ensure a righty - lefty punch of Donaldson and Votto regardless of what happens with our two favorite free agent Jays.

I'm dreaming on Joey, it's fun, it's passion, it makes sense.

And don't hurt your wrists. 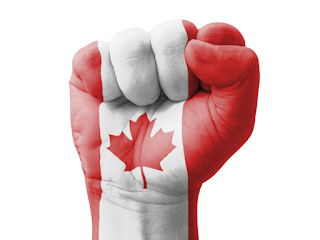