What to do on a Jays off Day? Go to Pitch Talks 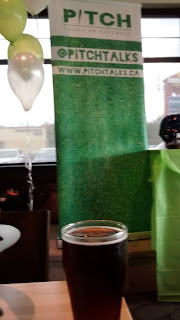 The ad said, Pitch Talks in Peterborough, with speakers Andrew Stoeten, Jen Smith, Pete Orr, Jeff Blair, Stephen Brunt, and Natalie Stoberman. Monday June 20th, at Boston Pizza I thought to myself, “I love baseball, and I love beer and I love pizza”, who am I to deny my quest for self gratification? I mean, if you can’t scratch that itch once in a while, it’s just going to fester into something that needs to be lanced. I ordered and printed my ticket, paying the full $20 even though I know Pitch Talks often offers a discount code, about a week before the event. Sure enough $5 off was soon advertised and I cursed myself for not waiting (I’m so weak).

7:55. Show time. Natalie takes the stage and announces the first two speakers, Jenn Smith and Andrew Staten. Staten? After a few guffaws, she corrected herself and announces Andrew Stoeten.

1st question: Should Stroman be sent down to AAA? Consensus of both Stoeten and Smith is that with weaker opposition in upcoming games, Stroman should continue with the big club and work on things like staying on top of the ball more. Jen thinks he will work his way out of it and Stoeten thinks sending him down doesn’t serve a purpose.

Next question: Sanchez to the bullpen, yes or no? Basically both say it’s a moot argument, he’s going to go there, so why even debate it.

Next question: Should Travis be leading off? Consensus, not yet. Give him some more at bats.

TRIVIA:
Stoeten ordered a Strongbow while onstage
Jen collapsed earlier in the day, got checked out at the hospital and still made the show.

Next up, Pete Orr of Canadian baseball fame. He tells us he has played for Atlanta, Washington and the Phillies. He has represented Canada 8 times, including 2004 Olympic team, 2015 Pan-Am Gold winning team and on 3 World Classic teams. Somebody from the crowd yells out about his dustup at the 2013 Classic game with Mexico. Orr explains that a baseball fight is totally different from a hockey fight because with a baseball fight nobody follows the code. He relates how when the fight started the first person he locked eyes with, was his team mate from the Phillies who had a locker two stalls down from him in the Phillies locker room. Can you say awkward? Do you punch out your teammate from your professional team? Here’s the fight:

Both agreed Stroman should be allowed to stay up with the Jays. Reasons for struggles? Not getting on top of the ball and the league adjusting to his repertoire.

Not very much depth in the Jays system, especially after AA trades and last year’s deadline.

Fans trend to overate prospects and different regimes look at players differently. Case in point, Dalton Pompey. Brunt claims Shapiro and Atkins saw him in Spring Training and came away less than impressed. Blair said he spoke to a GM about Pompey, who said he was a 4th outfielder, at best.

RE: JB’s toe injury. Brunt’s expression emphasised his tone, that JB will be gone for a lot longer than 15 days. Without a proper diagnoses and from what he’s heard, it gonna be a longer recovery.

Blair says he’s got a feeling that Jose is ready to move on and his market value may be affected by the FA pool in 2018. (Why spend 30 mil on a declining JB when the pool with be deep in a couple of years)

Both Blair and Brunt agreed that there’s contract talk going on behind the scenes with EE (note: this was speculation on their part).

Blair and Brunt spoke about being surprised at the Martin signing by AA but after observing him in the locker room, they get it. “Martin has no issue of yelling at Bautista, Tulo, Donaldson or anybody else on the team and the respect they give him is amazing”.

Then, a rather spirited discussion about Shapiro’s draft strategy and the Keith Law comments about it. Stoeten wrote about it also.

It was at this point some guy in the audience, who identified himself as a representative from some local radio station, said he had a non baseball question. What was their opinion on Strombo being let go?

A fucking hockey question at Pitch Talks? Seriously? That was my cue to go drain the weasel and recycle my beer rental.

Learned a little, had good conversation and would highly recommend a Pitch Talks event to everyone.
Posted by RADAR at 9:00:00 AM