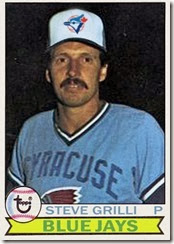 With the trade of Jason Grilli, much is being made of the fact that his dad had been a Jay. So who was this guy?

He was drafted by the Tigers in 1970 out of Gannon University. As far as I can tell, he's the only player ever drafted from there. Working his way through the system, he made his major league debut in 1975 as a September call up and stayed in the bullpen the next couple of years, making 36 appearance in 1976 and 30 in 1977.

At the end of that season his contract was sold to the Jays. He spent the next 2 years in Syracuse, getting a September call up in 1979, He pitched in one game, 2 1/3 scoreless innings in relief. That was the last time he saw the majors.

He went back to Syracuse in 1980 and was released by the club at the end of a horrific 1981 spring training. The O's bought his contract and sent him to Rochester. While there, he pitched in the longest game ever, coming in the 33rd inning. He faced 3 batters, got none out, and then gave up the game winning hit. This got his baseball cap into the Hall of Fame. He retired at the end of the season.

This article is a thorough summary of his playing career. BRef's page is here.

The best story I could find from his playing days was when he was with the Chiefs. In 1979, while pitching for the Chiefs, he would do an air banjo routine to a Doobie Brothers song during the seventh-inning stretch. Sadly I wasn't able to find out which one.

In 2010, he was featured in a book called A Bitter Cup of Coffee: How MLB and The Players Association Threw 874 Retirees a Curve by Douglas J. Gladstone. The book outlines how a bunch of players got shafted when the pension rules changed in 1980. This article talks about the book.

He also is the colour analyst for the Chiefs' tv broadcast. He moved into the radio booth upon retirement because everyone loved his personality and at some point transitioned to tv. Time Warner broadcasts 24 games a season. I bet he doesn't talk about how big and strooooong a player is.

Which brings me back to his son. A month ago he did a radio interview in which he talked about Jason and pitching injuries in general. You can listen here. And a fun fact -  they were the first American father-son duo to both save games in the majors.

Assuming this is Jason with his dad. I know you'll all love the facial hair.
Posted by MK Piatkowski at 12:00:00 PM