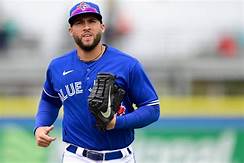 After getting pummeled by the Yankees yesterday, the Blue Jays were looking to snap the 2-game skid and even the weekend series. Hyun-Jin Ryu had successful TJ surgery and will be out 12-18 months. Trevor Richards was placed on the 10-day IL with a neck strain. Lefty Matt Gage was recalled in his place. Alek Manoah got the start with Alejandro Kirk behind the plate. Bo Bichette was back in the lineup after missing a day with a foot contusion. Matt Chapman was also back in the lineup after yesterday off to rest his sore wrist. Vlad was given the half day off as DH with Cavan Biggio at 1B. Raimel Tapia was in LF with Lourdes Gurriel Jr. having the full day off. Could the Blue Jays get back on track after two blow out losses in a row? Here is today's game recap.