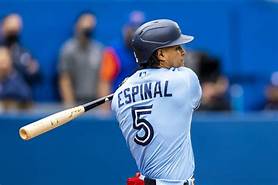 Santiago Espinal drove in 3 runs in an 8-3 victory over the White Sox to extend the winning streak to 8 games. It was the second straight series sweep after starting the season 0-4 in games which could clinch a series sweep

After a solid 7th straight win on the strength of a 3-run shot from Danny Jansen, the Blue Jays were looking for their second straight series sweep and 8th straight win overall. Hyun-Jin Ryu is headed to the 10-day IL with an inflamed forearm. The Blue Jays really need to get the injury examined for possible UCL damage. Alek Manoah got the start with Alejandro Kirk behind the plate. George Springer missed his second straight game with a non-COVID illness. Bradley Zimmer took his place in CF. Lourdes Gurriel Jr. got the complete day off with Raimel Tapia in LF. Vlad had the half day off as DH with Cavan Biggio at 1B.  Could the Blue Jays make it two straight series sweeps and 8 straight wins overall? Here is today's game recap.