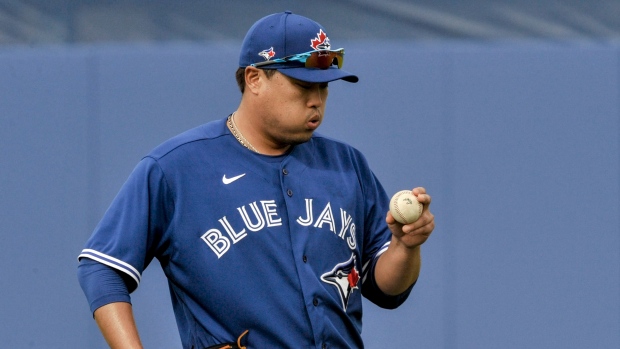 Baseball has survived another week of play. After a disastrous opening week that saw an entire team, the Miami Marlins, come down with the COVID-19 virus, affecting the schedules of no less than six teams, including your Toronto Blue Jays, the MLB saw a better week with one further team infected by COVID-19. The Weekend series between the Ct. Louis Cardinals and Chicago Cubs was wiped out when sevveral Cardinals players tested positive for COVID-19. As of the publishing of this blog post, the MLB has very little wiggle room left to reschedule games if further teams are affected by the COVID-19 virus or if there is inclement weather. Rob Manfred has already threatened to shut down the league if players don't smarten up and start staying in there bubbles. This week started off rough for the Blue Jays, who were clobbered 10-1 on Tuesday by the Atlanta Braves. It was pretty apparent that the Blue Jays were rusty after having 4 days off between games.  The Blue Jays won the next game on the back of a strong 5 ending 8K performance by Hyun-jin Ryu and a pair of manufactured runs off of base hits and a Sac fly. The Braves took the the rubber match on Thursday with Nick Markakis walking off the Blue Jays in the bottom of the ninth after Toronto had battled back to tie the game in the 7th inning. Next, the Blue Jays moved on to Boston for the final stop in their marathon road trip to start the season. Boston took the opener of the series', building a 4-2 lead after three innings and hanging on for a 5-3 victory. The second game of the weekend series went Toronto's way. Chase Anderson made his Blue Jays debut, coming off at 10 day IL. He threw 2 strong innings and one poor inning. The bullpen picked him up, throwing six shutout innings. Again, the Blue Jays scraped across two runs off an RBI double by Bo Bichette in the 7th and a groundout by Rowdy Tellez in the 8th inning. Sunday's game featured a back and forth game with both teams hitting long balls. Was the game knotted at 3, the Red Sox the 9th off, what else, a home run. It would have been nice for the Blue Jays to wrap up the road trip with the series win, but give the Red Sox credit for their timely hitting. Looking at the week ahead, the Blue Jays start the week with a pair of games against the Miami Marlins. It is likely that the Marlins will not be able to field a very competitive team with most of their players still sick with COVID-19. The Blue Jays wrap up the week with a weekend Series against the Tampa Bay Rays, who they played in the opening weekend in St Petersburg. the Rays won that series on a series of unforced errors By The Blue Jays. Maybe on the weekend the Blue Jays will exact some revenge time. Here are 10 random thoughts from week 2 of the MLB

1. The Blue Jays could see a pair of injured pitchers return in the short term. Ken Giles, who was diagnosed with a mild strain of the flexor mass of his right forearm. He was seen in the bullpen on the weekend doing some arm exercises. The next step is likely to try throwing a bullpen session. If that goes well, he could be back sometime later this week or early next week. Starter Julian Merryweather is also progressing nicely from an oblique strain and could be available as a depth option soon. Normally, when a player is close to returning, they would play some games in the minors. However, that is not an option this year with the minor league season cancelled. Instead, teams will have to limit pitch counts and maybe let returning position players DH as needed.

2. Randal Grichuk returned from the IL after missing a week with an SI joint injury. These are the types of injuries fans can expect to see with this sprint of a season. Grichuk showed no ill effects from the injury and collected 4 hits in 21AB and he drew 2 walks as well. He looked good in the field. Hopefully he stays healthy the rest of the way.

3. Trent Thornton was placed on the 10 day IL after feeling something weird in his pitching elbow. Anytime an injury involves the elbow, you fear Tommy John surgery. Thornton already has a bit of a funky delivery that puts added stress on the elbow. Expect the Blue Jays to exercise caution with Thornton.

4. Outfielder Derek Fisher also missed time this week with a strained left quad. He'll be eligible to come off the IL mid week next week. No word on if he'll be ready at that time.Fisher was batting .250 with 3 hits in 12AB before the injury.

5. Chase Anderson finally made his Blue Jays debut Saturday after starting the year on the 10-day DL. The 32-year-old right-hander was acquired from the Milwaukee Brewers back on November 4th for minor leaguer Chad Spanberger. Anderson pitched 2 strong innings and one inning he'd like to have back. He ended up with the no-decision and got the quick hook, although he was likely on a strict pitch count given that he was coming off the IL and there is no place to play rehab games this season. Expect Anderson to be a spot starter and pitch out of the bullpen as well.

6. Jacob Waguespack had a weird day on Thursday, beginning the day on the Blue Jays roster, being optioned to the taxi squad, along with Espinal Santiago, as teams had to reduce their rosters by 2 players. He was then put back on the big league roster after Trent Thornton was put on the 10-day IL after feeling something weird in his pitching elbow. He warmed up in the bullpen, intending to come into the game in the 6th inning, only to be told he was ineligible as he was not on the official lineup card given to umpire Alan Porter. This was the fault of Charlie Montoyo and before you all say he should be fired for this, give me a break. You can't tell me none of you wouldn't have made the same mistake.

7. Bonehead decision of the week: The Cleveland Indians were contemplating how to allow fans safely back in the ballpark this week. Um, let's see, one entire team and several other players on several other teams has already been infected with COVID-19, throwing an already tight schedule into disarray and you want fans, who could have COVID-19, into the stands? No way! As it is, it's a miracle the season has lasted this long and we still have 6 weeks to go. At the earliest, fans should not be allowed back into the stadium until there is a vaccine. It's far too risky and baseball players are a unique set of athletes with different body builds. There are probably many more players who have diabetes or heart conditions because they aren't as in shape as athletes in other sports. Umpires and coaches tend to be older as well. Keep the fans at home

8. The Blue Jays better hit the batting cage on their off-day. They struck out 15 times on Sunday and all but Cavan Biggio had at least one strikeout.

10. Blue Jay of the week: Hyun-jin Ryu. He threw 5 solid innings and struck out 8 in his first win in a Blue Jays uniform. Ryu was one of the big-ticket  free agents last off-season.
Posted by opinionator777 at 10:00:00 AM