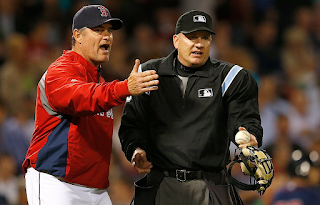 Two of our favourite baseball peeps right there. Hopefully we can escape today without further umpire shittiness, but the first two games have not been good. On Friday, Nelson vacated the Barrio seating area, which has become entrenched over the years. Yesterday was an embarrassment to the profession of umpiring, that:
1) Made Charlie mad, which never happens, and
2) Probably embarrassed our resident umpire, Wince.
Our ace takes the hill today, and at least neither Nelson, nor CB Bucknor will be behind the plate. They will be on the corners though, which means...Check swing madness. Shitty umpires...Go fuck yourselves. 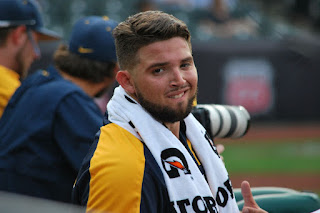 Last time out, the large human went 6 innings against the Yankmees, allowing a single, and walked 4, while striking out 7. More of that please. Adam Oller had a disastrous debut against the Rays, but his minor league track record suggests he's capable of much better results. A 1.25 WHIP, 8.5 H/9, 0.9 HR/9, 2.7 BB/9, 9.3 K/9, and 3.43 K/BB, across 380.1 innings, in 99 games, 56 of them starts is much better than the turd he laid on the mound at the Trop. Not like that hasn't happened to a pitcher in that shithole before, is it?
Never, ever look at a pitching matchup, or the starting lineups, and call it a gimme win. It's baseball, and baseball can be kind of fucky. Trust me, or just ask the resident gamblers, RADAR, and nego. Though, I think RADAR's a former baseball gambler, who realized the folly of it long, long ago in a galaxy far, far away.
Oakland Athletics starting lineup: 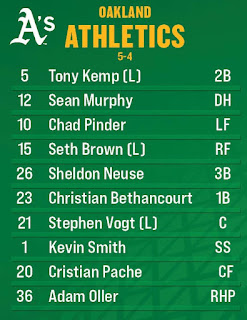 And now...The starting lineup for your Torrrono Blue Jays: 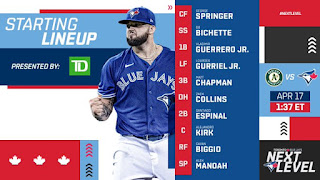