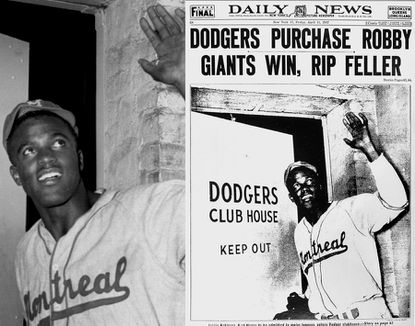 What do you say about someone about whom so much has been said, and written? Intimidating to say the least. Rather than failingly try to cobble something together, I'll just step back, and let another legend, who was there, not on the actual day, but for the majority of Jackie's career, say it for me. This broadcasting giant, joined the Dodgers in 1950, replacing Ernie Harwell, and working alongside Red Barber. Three Baseball Broadcasting Mount Rushmore figures on one team? What an incredible treat for Dodgers' fans.

In honor of the great Jackie Robinson on the 75th anniversary of his momentous Opening Day, here's a story about what Jackie faced, his teammates' support, and the tradition of commemorating April 15th. pic.twitter.com/GFYaOTHCzv

One of the things Jackie's famous for, is his steal of home in the 1955 World Series. Yogi always said he was out, and probably maintained that stance until his dying breath, but on that day, it didn't matter.

He had a very unique running style, and I certainly wouldn't want to have been a middle infielder trying to turn a double play, with him barrelling towards me.
But there's so much more to Jackie than what he did on the field. There's the man, who was gone way too soon, in 1972, at the age of 53. I would think, being ordered by Branch Rickey, to stifle the anger, and not fight back, against the vicious racism he faced took a huge toll on him, as he appeared to be a very old 53, in his waning years. He was part of the Civil Rights Movement, and marched with Dr. Martin Luther King. His last speech at the 1972 World Series included an impassioned plea to MLB to get a move on with hiring black managers, and (even though he didn't mention it) general managers.
Wait...Wut?...Do you mean there's a baseball game on, tonight too? Whoa!
Regarding last night's proceedings, as fans, we tend to hold onto these shit sandwiches, much longer than players do, and think that they'll carry over to the next game. Players have learned to just flush them, so do the same:

Lineup card for the A's: 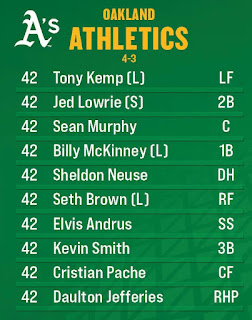 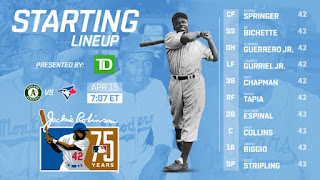 ...And of course, the required doggo GIF: