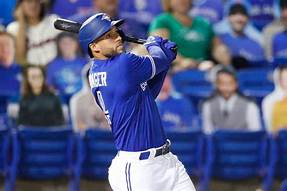 After taking 2 of 3 from the Rangers to open the 2022 season, the Blue Jays hit the road for the first time in the young season opening a 4-game series at Yankee stadium. Last season, the Blue Jays were 44-38 on the road. The Blue Jays were 11-8 in the season series last season, outscoring the Yankees 79-68. Alek Manoah got the start. He was looking to build on a strong rookie season where he went 9-2 in 20 starts with a 3.22ERA and 127 and 40 walks. Alejandro Kirk was behind the plate. George Springer was back in CF after DH'ing yesterday. Zack Collins made his Blue Jays debut as DH tonight. Could the Blue Jays get their first road win? Here is tonight's game recap.