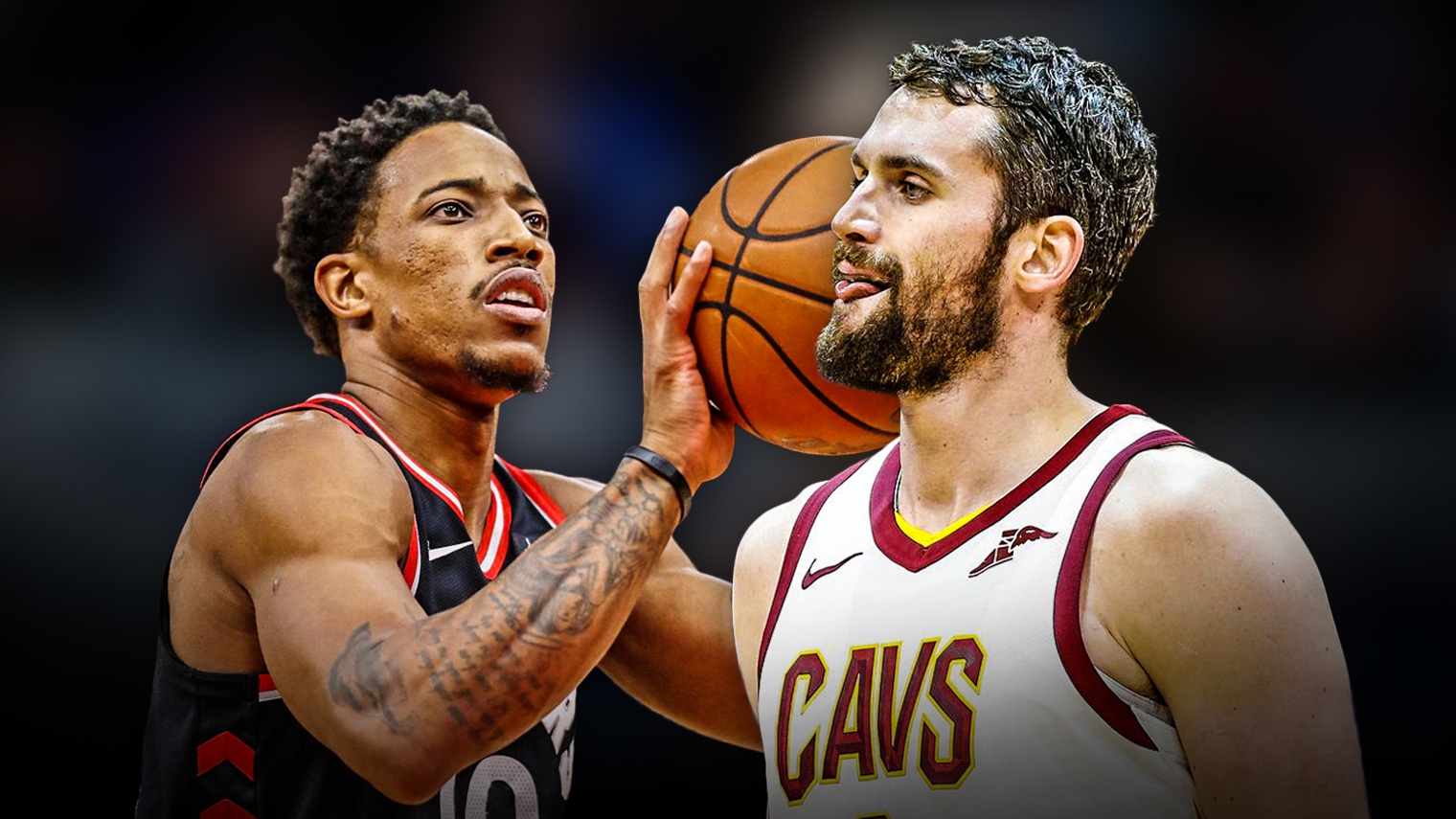 If you had to ask me for my opinion on what I think about the recent reports regarding Kevin Love and DeMar DeRozan, I'd argue that they both lived up to the phrase "being a man" in the best way possible.

By that I mean they both decided to open up about something essentially unrelated to basketball to the public: they're both dealing with their own respective mental health issues.  If you're unaware of either situation, DeMar tweeted this out the Friday night of the NBA All-Star weekend, and Kevin recently wrote an article for the Player's Tribune about his own experience earlier in the basketball season.

In an article written by Doug Smith at the Toronto Star, in his opening lines he says:

"They appear to be invincible, professional athletes do, with so much money, so much fame, so many people to help with everything — a first-class life, everything is taken care of.


And then the difficult, lonely moments hit — maybe in the middle of the night, or maybe just out of nowhere — and they struggle as many do to handle them, the tugs of life overwhelming."

Playing off that second line, that lonely moment would appear to be the night when DeMar sent out that tweet, and Kevin had experienced a panic attack in the middle of a game back in early November.

To some more, let's say, simple-minded people, they might say that both of these guys have nothing to worry about because:
Let's stop all that talk right there people. DeMar and Kevin are on the cusp of where some may longer consider them to be necessarily "young"; they're 28 and 29 respectively and will have more and more adult-like responsibilities coming their way. DeMar has two kids; no easy task when you're not home, let's say, at least 50% of the time and I could be generous with that amount. I don't know much about Kevin's personal life, and I don't really care to dig, but the man most likely has his own issues/problems/duties/responsibilities behind the scenes that he deals with as well.

People who often say 'they play a game for a living' irk me to no end. The reason why: these guys have given up a lot to get where they are, regardless of the fact that they play a game. Most people know that making it to the professional level is arguably the epitome of being an athlete (the Olympics are the other biggest stage), but it's a lot harder before that.

Above is a table that shows the average number of athletes that compete in typical sports in America (it's from 2013/2014, and I'm guessing it's only US athletes).  If you notice, out of half a million boys that are playing high-school basketball at any point in time, less than 5% are going to go play NCAA ball, nevermind D1. DeMar played at USC (a D1 school) and Kevin played at UCLA (also D1), so they've already had a major hurdle to get across in terms of making it there, nevermind getting to the league.

This next table plays off the last one by showing the overall percentage of making it to either the professional level or NCAA from high-school and a lot of other notable points in terms of rosters spots, seniors drafted, etc. Note the bottom row. 1.2% of NCAA basketball players make it to the league or 0.03% of ALL high-school players. DeMar and Kevin both played at D1 schools, and both made it to the NBA and are star players in their own respective rights. I'm pretty sure the fact that "they play a game" has little to do with how many odds they defied to make it to where they are. If you think all that pressure they've had on them to make it to college, then to the pros, and then to make sure you play well enough to keep your job in the pros hasn't maybe worn them down even the slightest bit, then I think you might want to take a step back and reflect upon that.

Now let's talk about money. Whether if you were a fan of it or not, DeMar is into the second year of his "max" contract (roughly 27 mil per) and has made roughly 66 million to date.  Kevin has made just shy of 100 million and has two more years with the Cavs at 24 and 25 million per season respectively. This is before their endorsements contracts as well; both men sport Nike sneakers while playing, and DeMar has those (sometimes) painful Google Home ads, and Kevin is a spokesperson for Banana Republic. They probably have other deals as well, but that's beside the point. Neither man is necessarily facing a shortage of money, at least by looking at their contracts, but money doesn't solve everything. Sure they make WAY more than the average individual, but if money couldn't necessarily help to fix my problems or your problems, then I don't think it's going to do much for them. Yeah, it'll make some things easier, but that doesn't mean it's guaranteeing them to be happy. I go on and on about this portion, but most people can see the shtick I'm getting at no matter which way you say it. We need kinda stop saying these guys have it easy just because they have a fatter wallet. 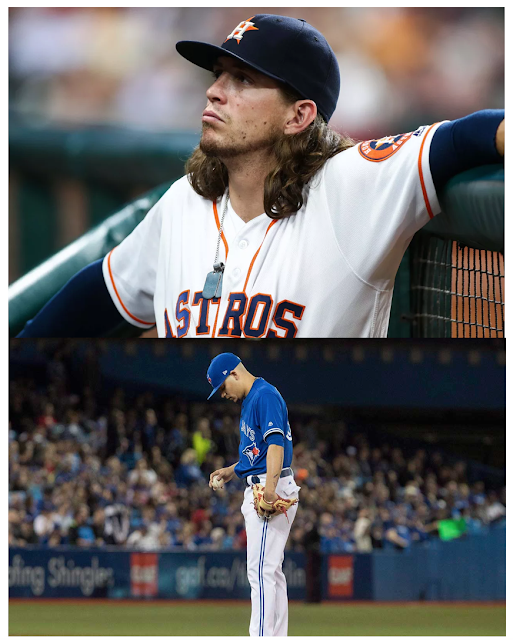 This is ultimately the point I wanted to kind of bring this all together.  Last year, both a former and current Jay admitted they were dealing with some sort of mental health issue. Osuna had done it publicly and directly, while Colby Rasmus did it more so behind the scenes and kept it to himself. I can level with both men going about it the way they did. Some may disagree with how Osuna went about it, and I can understand why (some personal details need not be shared or known), but he had done it in a way that appears to have set the tone for how Kevin and DeMar both announced their issues.  He told media what he felt, why he felt it, and how he hopes to get over it. Which is fine; he doesn't need to make a public therapy session, nor should it be. It's simply admitting "this is what I'm dealing with, and I what I plan to do about it". Why hate the guy for wanting better himself in that way?

Colby didn't do this, and that's fine as well; he still came around to know what was bothering him. He seems to have somewhat admitted that chasing money wasn't doing anything for him, and that time away from the game helped him to realize the other things we was missing in his life. It doesn't surprise me that he came to his realization this way. He often (at least to me) carried the look that he was putting a lot of pressure on himself; his face anytime he struck out seemed to be of disappointment 75% of the time, and just generally looked like the type of person that kept to themself. Now we can speculate a number of things as to how he developed the attitude he did, but that's not why we're here. The man realized that something wasn't right for him, and decided that he needed some time to deal with it. That sounds a lot healthier than just bottling everything and playing ball.

All four of these guys have shown that they all have something going on outside of the field or the court. Many people forget this. Now, I'm not advocating for every athlete to come forward and announce whatever issues they may be going through. My reasoning is that they shouldn't necessarily have to. Why? We are the reason why. Every person has their good days and their bad days. Athletes have their good days/games and their bad days/games. Dumping all over them because they may be having a bad day doesn't do much to foster a better development for that person. It just adds to the storm of things they may be going through. I have had many a time where I have said that an athlete has 'sucked', and will most likely continue to say it when someone (no pun intended) drops the ball during a key moment during the game. I don't go as far to say they should quit their career because of it or should end their life like some morons do. At the end of the day, these guys are people. Playing a game. That you and I both love. Leave them be and them play. If they fuck up, oh well, shit happens. Go and get next guy.
Posted by Unknown at 7:00:00 AM