It's time to put the wave into the stadium experience 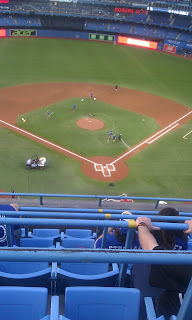 This was the view from my seat on Tuesday night. Section 524, row 6. Sections 524 & 525 may be my favourite in the whole stadium, although I haven't been there for a few years. Yes, you're high up but you can see the whole field. You can accurately judge fly balls and can see where the ball crosses the plate.

It was a beautiful night, a great game, and I spent the second half of it in fear of the wave.

I hate the wave.

I'm a theatre director. I believe in the power of collective experience. I know how to direct the energy of the audience and the difference it makes in performance when the audience is with you and when they're distracted. So nothing annoys me more when some yahoos decide to start the wave when there is a pivotal moment on the field. Which happened at the top of the 8th on Tuesday.

The team found itself in some trouble. And instead of lending the team their energetic support, the crowd does the wave. It sputters out when the team makes a double play then gets a pop up but the damage is done. In the bottom half of the inning, the wave starts up and goes all the way through the end of the inning, include Jose Bautista's final at bat of the night. It only stopped because Osuna's music came on and directed the crowd's energy.

I was lucky. The people in my section wanted no part of it. I had no one in the two rows in front of me to block my view. But I felt the crowd move away from the team and it saddened me. The energy shift was palatable and I'm sure the players feel it as well.

When I express my hatred of the wave, I'm told I'm no fun. That it brings up the energy of the crowd. And that is true. Which is why it is time to give it a formal place in the stadium experience.

In the middle of the 5th, the time was devoted to doing a dance break, encouraging the crowd to get up, dance, and make some noise. It was only partially successful. Other attempts to do the same throughout the rest of the game met with the same results.


So those in charge of the stadium experience at the Dome, here's my proposition. Turn the middle of the 5th into the Wave Break. Each game, make an announcement that a certain section is to start it (change it up each game so there's anticipation as to who gets to do it), count them in and decide the direction, and let it go for two minutes. Everyone will get to know when it will happen so those who want to do it can. This will raise the crowd's energy up when it starts to flag without distracting from what's happening on the field.

This will have the side effect of not needing the annoying music to pump up the crowd during at bats. I came to realize those moments were working as a wave suppressor.


"You get The Wave going, you set it up, and it goes four, five, six times (around the stadium), it raises the energy of the crowd," he says. "They get more behind it. They think they've accomplished something with the team. They express themselves with the team, how they feel about them. It makes all my other cheers after I do The Wave, louder, more intense. And I can build off that."

Think about how to harness the energy of the crowd to support the team even on nights when it's not going well. We know the crowd pumps up the athletes but it's hard to get excited when there is no scoring, or there's sloppy play on the field. How about being more explicit about how the game is going and asking for the fans to send encouragement? Acknowledging where the crowd is allows you to move them to where you want them to go.

Manage those moments well and the Dome retains its rep as a home field advantage. With the added bonus that I can enjoy watching the game without worrying when is the time the wave is going to take and ruin my game experience.
Posted by MK Piatkowski at 7:00:00 AM