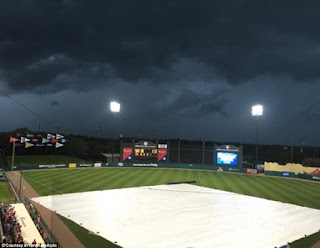 By the time this post goes up, Irma will have tracked far enough north that all the MLB, minor league cities, and grapefruit league towns will be clear. So here's a place to talk about news we hear about any possible damage, as the storm hit the entire state.

Sadly, despite a lot of people rooting for it, I doubt anything happened to the House of Horrors. Sigh.

Here's some info:
How the Marlins planned to keep the stadium safe.
It may not have worked.
The Tigers turned their Lakeland complex into a shelter.
Lakeland got the eye of the storm.

the center of hurricane Irma seems to be moving directly toward Lakeland which is a fitting thing for the 2017 Tigers
— jad (@aerojad) September 11, 2017


BTW, the above photo is of Champion Stadium during a storm in spring of 2016. It's located in the ESPN Wide World of Sports Complex in the Walt Disney World Resort (isn't that a mouthful!) and is the home of the Atanta Braves. Based on what I saw on the radar, it was the location the worst hit.

While Dunedin got a lot of wind and lost power, as of this time it seems they're weathering it very well. However, the commission charged with negotiating with the Jays about the next complex were supposed to meet tonight. It's been cancelled and there's no new date. If Dunedin has to pay for a lot of damage, they won't have anything to kick into the new facilities. So let's hope all is well.

Marlins Park and the spring training homes of the Tigers and the Braves seem to have been the worst hit. If you find info about other teams, share below and I'll update the post periodically.
Posted by MK Piatkowski at 7:00:00 AM