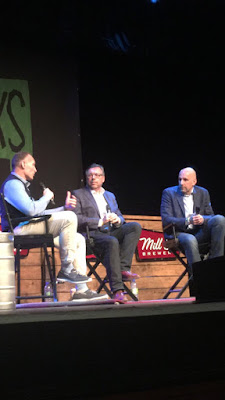 Tickets are purchased and we're off to PitchTalks. To see Mark Shapiro and hear his words concerning the state of the Toronto Blue Jays. It's Monday afternoon, 2 weeks into the season, and I wonder what the reception will be like for the current architect of the 2 and 10 team. My friend meets me at my house. Burgers or wings? He opts for wings. Good choice. I head the car for Duff's on College Street figuring it's close enough to the venue, Queen Elizabeth Theatre at the EX.

"I have something to do while we eat", he says. An over/under survey they did on the At The Letters podcast. What the fuck, I'm game. While we wait for the wings and drinking some fine draft, he hits me rapidfire with obscure questions. Over/under on the number of Jays complete games pitched?How many games Pearce will play?How many games will Morales play at first? Pillar's OBP at the end of the year? Perhaps I'll pry the quiz from his clenched hands and let the commenters here have a go at it.

Wings are finished. Beer is consumed. and off to the event. Twelve bucks for parking? I wanted to park the car, not rent a spot in the middle of nowhere for a week. Screw it, pay the man. Into the theatre we go. Guy wants our names so he can check it off the list, then big dude slaps on a wrist band. Ah okay, this hasn't happened before at a Pitchtalk event. I ask big guy, Just how many people are here? Don't they know the Leafs are playing tonight? He replies, dunno, 5 or 6 hundred. Well okay then. Over our shoulder we watch Jamie Campbell head in for the event.

The theatre is pretty full and we're fashionably late for the first panel, so we sit in the 4th row from the back. Swell. My buddy gets a text. Psst. What'd mean Psst? "We're moving up to the VIP seats", he says. You've been drankin' too much my friend. No, c'mon old man. This fucking guy has lost it. But off we go and sure enough, 2nd row seats. It seems he knows somebody, who knows somebody, who is involved somehow,who actually likes him enough, to give both of us access to a very fine vantage point. Sometimes things work out. I feel like a celebrity.

The first guest who was being interviewed was, Malcolm Johnston, who wrote this article on Donaldson. Second up was Tim Raines and Jonah Keri. Very entertaining, but the star of the show was coming up after the intermission.

Originally advertised as Dan Shulman interviewing Shapiro, I was pleasantly surprised when I seen Brunt join Shulman for a preamble, before being joined by Shapiro.

This is what I came for. Shapiro was greeted with applause and it seemed to be a very cordial crowd, understanding that Shapiro probably had a thousand other places he could be.

The Q and A from Brunt and Shulman

Q.  With the Jays poor start,do you have any point of comparison?
Q. Had he talked to Gibby?
Q. Who takes the reins in the clubhouse?
Q. How do you balance not making moves?
Q. What is the injury status of  Happ, Sanchez and JD?
Q What is the vision going forward for the RC?
Q. Grass?
Questions from the audience.
( Note. He took quite a few, I don't want this to be tl:dr so I won't do them all)

Q. Did you rent or buy? ( asked by JITH commenter danpleasacshorse, well played )
Follow up- Has he thought about getting unsigned FA pitchers such as Peavey and Fister?
Q What is the message to the fans and the players during this start to the season?
Q With the minor league system depleted, how confident is he going forward?
Q How did you get your start in baseball?
Q What was your off season plan?
Q. What does he think of the CBA proposal of a shorter season and rest for the players?
Q Biggest challenge or surprise coming to the Jays?

There were more questions. One was for Shulman, one about Jose and a few others but I'll leave it for now.

If you would like to listen to the podcast of the Shapiro part of the show and get more detail you can hear it here.

Definitely a good time, it ended soon enough that we were able to watch the Leaf's score in overtime.
You should try and attend one of these.