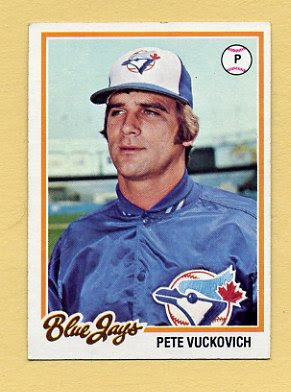 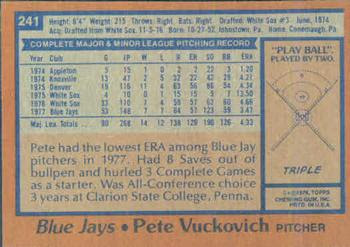 In the first off-season, Vuckovich was traded along with a player to be named later (prospect John Scott) to the Cardinals for pitchers Tom Underwood and Victor Cruz. Underwood replaced Vuckovich in the rotation in 1978 while Cruz made his MLB debut halfway through the season. Cruz was traded that offseason to Cleveland for shortstop Alfredo Griffin and a prospect. Underwood was traded one season later as part of a blockbuster trade that sent him, catcher Rick Cerone, and a prospect for second baseman Damaso Garcia, lefty starter Paul Mirabella, and Chris Chambliss. Chambliss was then flipped to Atlanta for future relief pitcher Joey McLaughlin and future outfielder Barry Bonnell. (More on him another time.)

So one could say Vuckovich was responsible for the first great double-play combo in Jays history as well as some major pieces in the Jays farm system. Not too shabby.

After a couple of solid seasons with the Cards, he was flipped to the Brewers where a torn rotator cuff a few seasons later ended his career. While he was in Milwaukee, he owned a bar with Gorman Thomas called Stormin' & Vuke's. The folks in Milwaukee liked him so much that when he retired he moved to the booth, doing colour for Brewers broadcasts for the next three years.

During that time, Hollywood came calling and he played Clu Haywood in Major League. Possibly because the cast would all hang out in his bar.


In 1992, the Pirates hired him as a pitching instructor and he worked his way up the ranks to end up as a special assistant to the GM. Jack Z then hired him away for his Seattle front office. This past year, after losing his job in the purge following Jack Z's departure, he joined the Diamondbacks as a scout.

Gotta say, sounds like a pretty good life.
Posted by MK Piatkowski at 7:00:00 AM