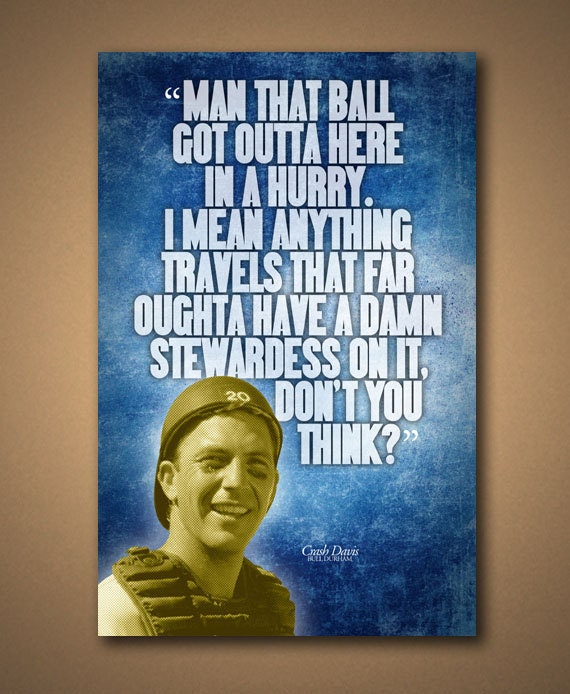 You've got to know your cliches:

Bull Durham is my favourite film of all time. My Dutchman watched it so he could understand me better. What I really love about it is that it's smart, witty, full of baseball truisms, and Kevin Costner was at his hottest.

It doesn't hurt that the love interest isn't some hot blonde barely out of school but a smart, literate woman who knows what she wants and is in control of her sexuality. That sex scene at the end? Who thought painting toenails could be so hot?

And there's the script. The lines! Really, the whole film is quotable. My faves:

"Relax. Alright, don't try to strike everybody out. Strike outs are boring, besides that, they're facist. Throw some ground balls - it's more democratic. So relax, let's have fun OK? It's fun goddamnit!"

"You just got lesson number one. Don't think, it can only hurt the ball club."

"How come in former lifetimes, everybody is somebody famous?"

"You be cocky and arrogant, even when you're getting beat. That's the secret. You gotta play this game with fear and arrogance."
"Right. Fear and ignorance."
"No, you hayseed. It's arrogance not 'ignorance.'"
"I know. I just like seeing you get all worked up."

And of course, this classic:


So what is your favourite baseball movie? Why?
Posted by MK Piatkowski at 7:00:00 AM