Game 6 lives in the collective memories of not just Jays fans but baseball fans who like history and a flair for the dramatic. But not so well remembered is the slug fest that was game 4.

Going into the playoffs, the Jays had done something historic. They were the first team in AL history to ever have the top three players in the batting championship on the same team. The heart of WAMCO. These guys: 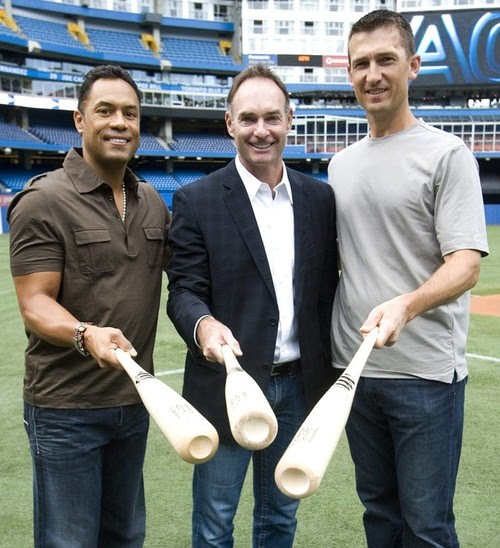 Needless to say, the team had a bit of firepower. On this night, the lineup looked like this:

No, your eyes are not deceiving you. Molitor was playing third. Cito had played him at first the game before, sitting Olerud. While it worked out, mostly because the pitcher was a lefty, I don't think Cito had a stomach to sit Olerud versus a mediocre righty. Which left Molitor playing third instead of Ed Sprague. To make things worse, it had been raining all day in Philadelphia. Combined with a shitty turf at Veterans Stadium, the field was very slippery.

On the hill, Stottlemyer was facing off against Tommy Greene. The Jays score 3 in the top of the 1st with the Phillies answering with 4. Green keeps the Jays off the board in the 2nd while Stottlemyer gives up 2 more. (Pitcher Green singles then Lenny fucking Dykstra hits a dinger.) He gets lifted the next inning for a pinch-hitter. His line: 6 R, 3 H, 1 SO, 4 BB, for a tasty 12.38 ERA & -0.489 WPA.

But hey, he gives us the infamous bloody chin incident! In his first major league at bat, he works at walk. He missed the sign from 3rd base coach Carlos Tosca when Alomar gets a hit and gets thrown out by a mile at third base. Which he decides in his wisdom to slide into head-first, scraping his chin. He gets to be a manly-man! 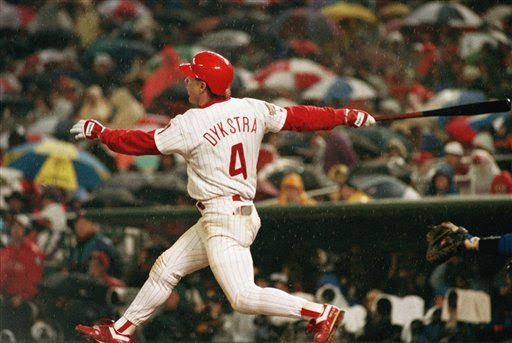 At this point, the Jays are down 12-7. You'd think this would be game over. You'd be wrong.

Jays score 2 in the top of the 6th. Castillo gives one back in the bottom of the inning, and the other the next. (At least he gets out Lenny fucking Dykstra.) Top of the 8th, things looking pretty hopeless. But now the fun begins.

Larry Anderson, who had a 1-2-3 inning in the 7th, gives up a RBI double to Molitor that scores Carter. And then Jim Fregosi makes the move that ultimately kills his team's chances of winning the series. He brings in the Wild Thing.

Mitch Williams immediately gives up a single to Fernandez to score Olerud. He walks Borders, then strikes out Sprague, who is pinch-hitting for Castillo. Turning the lineup over, Henderson scores Molitor and Fernandez on a single, then Devo triples to clear the bases. He gets Alomar to groundout and end the inning but the damage is done. When the dust settles, Wild Thing has given up 5 runs and the lead. At some point during this inning, two death threats to Williams are called into Veterans Stadium. Stay classy, Phantics.

Mike Timlin comes in the bottom of the inning and gets two quick outs. But with Lenny fucking Dykstra coming up and the Jays hanging onto a 1-run lead, Cito doesn't fuck around and brings in his closer Duane Ward. He gets his 4 outs and the game is won.

Both teams combined for thirty-one hits and fourteen bases on balls. I couldn't figure out how to embed the Win Probability chart but you can find it here.

As far as I can tell, the records still stands for a WS. The longest 9th inning post-season game was Nats/Dodgers last fall at 4 hours, 32 min. The other milestone that night was that the home plate umpire, Charlie Williams, became the first African-American to serve in that position in a World Series game.

You can find the complete box score here. Or you can watch it in all its glory: