So over the weekend I'm on a website discussing the latest Pitch episode and I run across this:

Well, Rougned Odor, for one, obviously. (With a gif of the punch)

Suck fist, Joey Bats!  Can't wait for you to come back to a US-based team and see your stats collapse once you can't get those Quality Canadian Steroids any more. 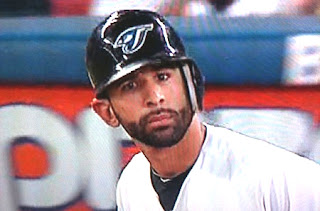 I give the following response:


He finally got regular playing time and they revamped his swing. His development had been completely messed up when he was a rule 5 player and ended up bouncing around through 4 different teams that year rather then getting daily work in AA. He always had power - that's why the O's rule 5'd him in the first place. Screw off with the sour grapes steroids thing. Where were people saying that when Chris Davis came out of nowhere, especially because he actually was using an approved drug (Adderall)? Dominican hits 50 home runs? Must be on drugs. White American hits 50 home runs? Well, he worked on it. It's racist.

People outside Toronto don't get that in that moment of the bat flip heard around the world, Jose was all of us. Context is important.

Toronto sports fans had suffered from incredible disappointments from all the teams that had the major profile in the city. Toronto FC had never sniffed the playoffs in their entire existence. The Raptors made the NBA playoffs only a few times in theirs and had never gotten out of the first round. The Maple Leafs, the biggest team in Toronto consciousness, hadn't seen the playoffs since 2004 where they were eliminated in heartbreaking fashion.

And then the Jays go on a magical end of the season run and get to the playoffs for the first time in over 20 years. It's hard fought. We're now in a win or go home situation. The go-ahead run for the Rangers scores on a throw back to the pitcher which hits off the batter's bat - something crazy that all the media covering the game had never seen. We get angry, convinced we're getting screwed yet again. Some people took out their anger in throwing stuff on the field and while I don't condone that action, I understand it.

Have you ever been in a room with angry people? It's unsettling. Now amplify that by 50,000 people in an enclosed space because the roof is closed and that's the atmosphere going into the bottom of the 7th in Game 5 of the 2015 ALDS. I'm convinced that's why in the bottom of the inning 3 errors on routine plays happen. We get the tying run across and we begin to hope.

Jose comes up to bat and the second he makes contact we know it's gone. Jose says he doesn't remember that moment. That's because he was all of us. He was our warrior, our champion. In that moment, we were saying a collective FU to decades of futility. It was the release of a city's angst. It was a fist pump with a bat and it was beautiful.

Odor sucker punching him because he dared to show his emotions after hitting one of the biggest home runs in Blue Jays history is the biggest piece of bullshit ever. It's ridiculous that MLB didn't throw the book at him. It was assault and he should have been arrested. And you Texas jerks CELEBRATED it.

So happy we swept your asses in the playoffs this year. Karma's a bitch.

I got the following response, after being told this person is not from Texas:


The year before Baltimore drafted him, Bautista had hit a whopping five home runs.  They thought he was a spry 2B-3B; they never envisioned that sort of power.  His professional high in HR, pre-2010, was 24, hit in AA/AAA in '05. Then he went another 4 years without cracking 20 in any of those seasons, even at all levels combined.  And then, one happy day, with the age 30 decline phase looming on the horizon, he triples his usual power level.  Yeah, definitely all about the swing adjustments, sure.

And as for the "racism" thing, I don't like cheaters, of ANY color.  McGwire and his "cream", who first made a joke of the record book, is white.  Bud "let's make EVERY game an interleague game! And ALL clubs should make the playoffs! Wildcards for everyone!" Selig, who turned the blindest of eyes to the cheating, is white. Tony LaRussa and his clubhouse steroid dispenser Barry "Needles" Weinberg, both white.  Paul LoDuca, white.  John Rocker and his tree-sized neck, white.  Chipper Jones, whom nobody calls out but who has the same neck, white.

Barry Bonds, who ruined one of the great careers of all-time (3 MVPs in 4 years while clean, and he should have had the 4th one as well…Pendleton's award was a joke) by becoming the worst cheater ever, with his wearing that freakin' armor to the plate and having a swing with his hands in the strike zone, so covering the outside half of the plate was easy as pie and if you pitched inside you got a warning, so he ended up with insane walks totals (I swear, if I was managing against SF in '03, I would have just had my pitchers keep drilling him in the head and take my ejections and fines just because his every at-bat was a freaking disgrace by that point)…okay, he's black, but the exception to the rule.  Most of the cheaters I've disliked through the years are as white as the driven snow.  Or at least Jose Canseco and Rafael Palmeiro and Alex Rodriguez, all of Latino heritage, but light-skinned.  So no, not a racism thing, no matter how much you want to make it so.

I swear on a Roger Clemens 'Roid Rage temper tantrum.  Bautista's sudden jump to the 50 HR threshold is IMO as legitimate as that of Brady Anderson (white) or Luis Gonzalez…i.e., not at all.