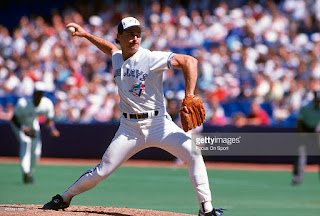 
What if we were to retroactively go back and use some metrics that are used today to see who should've won the Cy Young every year from 1979 through 1992 (the seasons that Stieb and the guy he is most often lumped in with - John Scott "Jack" Morris were [for the most part] average or better pitchers in the American League)? I'm not saying we go and pry the trophies from those who were awarded them. They won them fair and square. The "metrics" that were used to determine them are somewhat dated though, and perhaps a re-examination is in order.

The Cy Young is looked at differently now than it was then. Back then usually the pitcher with the most pitching wins on a playoff team took home the hardware unless the writers felt a reliever was more worthy.

That has changed recently, and there was no clearer evidence of this than Felix Hernandez' 2010 AL Cy Young Award for the last place in the AL Seattle Mariners (who went 61-101 on the season). Hernandez went 13-12 with an MLB leading 2.27 ERA while facing an MLB leading 1,001 batters. He led the AL in GS with 34, and IP with 249.2, while allowing a league low 7.0 hits per nine innings.

He wouldn't have stood a chance back when Stieb was pitching. He might've gotten a token vote or two from the Seattle writers along with praise for a great season, but I doubt he would've garnered serious consideration in a season in which CC Sabathia won 21 games for the playoff bound (2nd place in the AL at 95-67) New York Yankees.

"The King" absolutely lived up to his nickname that year. He paced the AL in bWAR (7.1), WPA (among SP [4.57], second to Joakim Soria [4.61] among all pitchers), and REW (4.19), and was third in fWAR (5.9) behind Cliff Lee (7.0) and Justin Verlander (6.3) along with his league leading traditional stats noted above. Simply dominant, and he was rewarded for it. Stieb had similarly dominant seasons and all he got from the voters was the sound of crickets. It was a different era though, and if he's ever truly going to get his due, it needs to be exhumed and examined.


This was not a fun year to be a Blue Jays fan. The team was downright terrible. Like utterly abominable. Tom Underwood led the Jays' pitching staff in bWAR and fWAR, and Otto Velez led the hitters in those categories. I don't need to say much more do I? The team finished 53-109, dead last in the American League, and yes it was as bad as it sounds. But there was a bright spot amidst all the doom and gloom, and he arrived on June 29th after a little over a calendar year of minor league duty (following his selection as an outfielder in the 5th round of the 1978 draft) at two different levels (Dunedin and Syracuse). He breezed through the minors, going 12-2 with a 2.95 ERA (having hit .192 as an OF at Dunedin in 1978) over the two separate seasons and suddenly found himself in the show, at a position that he was reluctant to try at first, in his age 21 season (though he would turn 22 about three weeks after his debut): 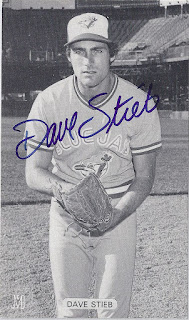 There he is folks, sans rock star mullet and porn star stache. The man who would anchor the pitching staff for the next decade plus. His first season was a decent one, as he went 8-8 with a 4.31 ERA (100 ERA+), and finished fourth on the pitching staff in bWAR behind Tom Underwood, Dave Lemanczyk, and Tom Buskey, and third in fWAR behind Underwood and Lemanczyk. As I said, he breezed through the minors and now did not look overwhelmed in the show. Having an exactly league average ERA+ in your first go around in the big leagues is a rock solid showing. In future years, but for a blip in 1986 (which he eventually fought his way through), he would demonstrate that he was here to stay as well, as he would not appear in the minors again until 1992, when he was on the downside of his career. What about the rest of the league? Here are the BBWAA picks for that year along with my picks for the Cy Young Award:

Don't worry my fellow Eck loathers, I'm trading this Cy Young in for the ridiculous one he received (along with the MVP!) in 1992. This one would've been a lot more deserved, trust me. He led the AL in bWAR (7.3), WPA (among starters [5.03], was second to Aurelio Lopez [6.19] among all pitchers), REW (4.43), in addition to leading the majors in ERA+ (149). Having a 2.99 ERA in the hitters' haven that is Fenway Park over a full season is a spectacular achievement, and he would've fully merited receiving this award. Mike Flanagan went 23-9 though (compared with Eck's 17-10) on a team that came within one win of a World Series title (had three cracks at it, but it was the year of Willie "Pops" Stargell and the "We Are Family" Pirates), and that was pretty much all she wrote.

A couple of interesting notes about my top ten. Look at the number of quality lefties in the league back then. Six of my top ten were southpaws. Six! Guidry, John, Koosman, Flanagan, Caldwell, and Monge. Five starters and Monge. Where have all the lefties gone? Also, Jim Kern everybody. A 6.2 bWAR and a 4.7 fWAR in 71 relief appearances and no starts. What? That is insane. His other numbers included a 13-5 record with 29 saves and a 1.57 ERA over 143.0 IP. 70.0 IP is about what you see today for most relievers, 80.0 IP at the most. As for the Morris/Stieb rivalry: Morris 1, Stieb 0.


The first step for any expansion team is to not lose 100 games in a season. Mission accomplished for your Toronto Blue Jays in 1980! It felt like a championship, after three straight seasons of 100 loss misery, but 67-95 was still only good enough for last place.

After four long years, the sun was starting to shine on Toronto's baseball club, and the youth movement that would eventually result in the salad days of 1983-1993 was starting to peak through the clouds. What was going on with pitching elsewhere you ask? Right then, let's get to it:

Oops! There's one name in the BBWAA list that didn't make it onto mine, and that would be the guy that was given the award that year: Steve Stone. He did win twenty-five games on a team that won one hundred, and he had a respectable 3.23 ERA (123 ERA+), but I pegged him somewhere around 15th just behind Stieb and Clancy. A solid showing, but IMHO not worthy of the hardware. Mike Norris was robbed blind that year. He led the AL in fWAR (6.0), WPA (among starters [6.22], third among all pitchers behind Corbett [7.58] and Quisenberry [7.09]), REW (4.76), and placed third in bWAR (5.9), behind Burns (7.0) and Gura (6.2). He also had the lowest H/9 in the league at 6.8 thanks in part to a tremendous defense behind him.

Once again we have six left handed pitchers in my top ten: Burns, Gura, Burgmeier, May, McGregor, and John. John is a holdover from the 1979 list, but everyone else is new for 1980. You just don't see this much quality lefty pitching these days. Jon Matlack of the Rangers just missed as well. The role breakdown is 5 SP (Norris, Burns, Gura, McGregor, John), 4 RP (Corbett, Burgmeier, Quisenberry, Gossage), and one swing man (May), which is quite diverse compared with what you'll see currently. That again is down to fewer innings for relievers in modern times, as two of the relievers pitched 99 innings (Gossage, Burgmeier), while Corbett and Quisenberry were up around the 130 IP mark, and May pitched 175.1 IP. Some swing man. That's a season's worth for some starters these days. What a rubber arm.

I have Stieb narrowly over Morris that year, as Stieb was able to outWAR him (according to both sites), and it was basically a saw off in WPA and REW. Stieb also had the better ERA+ at 117 to 99. For what it's worth, Stieb made his first appearance at the mid-summer classic, while Morris would have to wait until the following year for his. So that's 1-1 if you're keeping score.


Just as I was praising them to the skies for 1980, the tire fire of 1981 had to come along. One step forward, two steps back. Such is life when you're trying to develop talent at the big league level. The strike of 1981 was heartbreaking for baseball fans, but it probably couldn't have come at a better time for the Blue Jays. They stumbled and careened out of the gate to a miserable 16-42 record (.276 WPct!) when the strike hit. After re-convening, they managed to go 21-27 in the second half, but the damage was already kind of done. A 37-69 record in the overall, good for a .349 winning percentage, which projected out over 162 games, would've resulted in 105 losses.

Certainly a step back in the standings, but the pieces were definitely starting to arrive as another young starter (Luis Leal) arrived in 1980 and markedly improved in 1981, and by the end of 1981 the future best outfield in baseball had all had their big league baptisms by fire (Moseby in 1980, Bell and Barfield in 1981). Stieb clearly established himself as the ace of the staff in 1981 as well, as he pushed forward while Clancy struggled. Speaking of (future) tire fires, Joey McLaughlin was actually a decent option out of the 'pen along with Roy Lee Jackson in 1981. As for the rest of the AL:

A much better job by the writers this time around, as Fingers was definitely in the conversation with a ridiculous RA/9 (Runs allowed per 9 IP) of 1.04 across 78.0 IP. I put the two starters ahead of him though as they were slightly better. McCatty/Blyleven is really close. If WAR and only WAR is your thing, then your choice is Blyleven as he bested McCatty in both versions. However, McCatty was better in ERA+ (148 to 127), WPA (3.59 to 1.91), and REW (3.56 to 2.25). McCatty also tied for the major league lead in Winzzz with Dennis Martinez, Pete Vuckovich, Tom Seaver, and Jack Morris (all at 14), and led the AL in ERA and shutouts. Like I said it's very close, but I went with McCatty. One thing is clear: Blyleven got absolutely no respect from the writers in this or any other year, and they almost flubbed his slam dunk HoF case, but that's definitely outside the scope of this rambling.

This time there's a more normal ratio of 7 righties to 3 lefties (Righetti, Gura, Burns), and only one reliever in my top ten (Fingers). Guidry and McGregor were two lefties that just missed, along with righty starter Dennis Martinez, and Gossage was the only other reliever that was close enough to warrant a mention. Don't understand the writers' infatuation with Vuckovich. He had a decent season, but it was more like top 25ish than top 5ish, at least from my perspective. Must be the winzzz I guess.