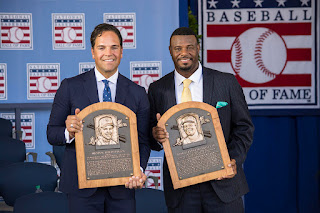 The 2017 BBWAA HoF ballot has been released, and once again it's pretty crowded. There are 34 players on this year's ballot, which can be seen (just the names, along with the 2016 vote tally if there was one, and how many years the player has been on the ballot) here. There's also one with a bit more info at the website of the National Baseball Hall of Fame here. Finally, there's one at Baseball-Reference, which has some stats and stuff beside the player's names. For some reason, it hasn't been updated though, and if you want to use it you have to knock off Danys Baez, Julio Lugo, Aaron Rowand, and Javier Vazquez, as they were not put on the ballot by the BBWAA, and you have to add Casey Blake and Matt Stairs, who were put on the ballot. More after the jump.

As I said above, it's very crowded with some very good candidates. Each writer gets to pick a maximum of ten candidates, so that's what I'll do. If I could, I'd pick more than ten, as this ballot needs some cleaning up, but rules are rules.

My ten would be Jeff Bagwell, Barry Bonds, Roger Clemens, Edgar Martinez, Mike Mussina, Tim Raines, Manny Ramirez, Ivan Rodriguez, Curt Schilling, and Larry Walker. I would love to be able to fit Vladimir Guerrero, Jeff Kent, Gary Sheffield, and Sammy Sosa on there as well, but the limit is ten.

There are also three elite closers on there that give pause. Trevor Hoffman, Lee Smith, and Billy Wagner are there saying "Hey, what about us?". I feel that closers are much tougher to evaluate, particularly in this era of the 3 out save. Smith goes back to the days when closers tended to get more than three outs for the save, so maybe that favours him. How much value do they really have? Teams tend to find out the answer to that the hard way when they start losing games late because nobody can put out fires started by the opposition. As far as I'm concerned, if you vote for one of these closers, you've got to vote for all three. They're that close in my opinion.

So that makes seventeen candidates that I think you can make a case for. That's half the damn ballot. Crazy sauce. I stick by my ten though.

Now, we come to the elephant in the room. The subject that none of the writers wanted to talk about when it was going on back in the '90s and '00s. "See no evil, hear no evil, speak no evil" as I seem to recall. Now they speak with their ballots. Fair enough. They've been granted that right by the HoF. It seems like a somewhat hypocritical stance to me, but hey I wasn't there. I never experienced whatever "hush" tactics, and bullying were used by baseball to keep what was going on quiet. I'm talking of course about PEDs.

The way I choose to look at PEDs and that era is that it was an epidemic back then (It may still be now, who knows?). I can't tell who was using and who wasn't using. Obviously some of the users were more plain to see than others. But if let's say 50% of the league was using, I'm not going to try to separate the sinners from the saints. Maybe it was a higher number. If most of them were using, and there are still guys that rise above the crowd, who am I to not vote for them even if I'm fairly sure they used? They might have been juicing, but they were playing against other guys who were juicing too. It's a bit of a mess really, and I can't be bothered to sort it out. Sounds like a cop out I know, but I've grown kind of fatigued of the whole sordid mess.

I think Bagwell, Raines, Hoffman and maybe Guerrero get in this year. I don't see Rodriguez getting in. I think he'll get the "We've got suspicions about you" treatment from the writers and will be delayed. I think he eventually goes in, just not this year. I see the known PED users remaining stagnant this year, not moving up or down much. Just kind of staying the same. Don't know what it's going to take for Mussina, Schilling, Martinez, and Walker to gain ground, although Schilling shutting his pie-hole might help his case because every time he opens it I think he loses ground.

So what about you? This article was more about voting philosophy and the way I choose to look at the era that most of these players come from than numbers. I have numbers that I look at, but I felt like dealing with the philosophical questions rather than the numbers was more important. What say you? Who are the players (maximum of ten) that you would select from this ballot if you had a say? Who do you think gets in this year? Where are you at with the whole "steroid era"? I think your feelings about it will have more of a say in how you vote than any number can, but that's just my opinion. Fire away folks.