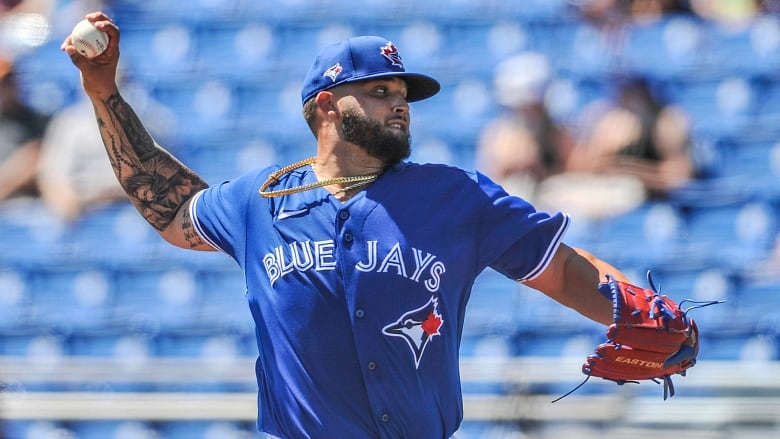 After a much-needed 4 days off to rest the tired bodies and recharge ahead of the unofficial start to the second half of the season. The Blue Jays actually reached the halfway point of their season back on July 4th and entered play Friday playing the 94th game of the schedule. They sat in the 3rd wild card spot a half game behind the surging Mariners who won 14 straight heading into the all-star break. The Blue Jays were also 14.5 back of the Yankees. They started the second half with a bang, exploding for 28 runs, which included a rare inside the park grand slam. The Blue Jays completed the sweep, outscoring the Red Sox by a combined 40-10 over the weekend. Alek Manoah had a strong 6-inning outing in his first start after striking out the side in his all-star appearance Tuesday. Jordan Romano had a 4-out save Saturday and Tim Mayza ws credited with the win Sunday to improve his record to 4-0 on the season. Raimel Tapia almost had 2 grand slams on the weekend. He followed up the inside the park grand slam Friday with a bases clearing triple Sunday. Last week's random thoughts post looked back at the first half of play. This post will be a look ahead to the final half of the season. Looking at the week ahead, the Blue Jays have a brief 2-game set against the Cardinals. The two teams split the two games in St. Louis May 23-24 with the Blue Jays outscoring the Cardinals 11-8. The Blue Jays then finish the week with four games against the Tigers. The Blue Jays won 2/3 back in Detroit June 10-12, outscoring the Tigers 17-4 in that series. Here are ten random thoughts from week 16 of the MLB.

1. Before we dive into this week's random thoughts post, let's take a brief look back at the all-star game, of which five Blue Jays (Jordan Romano, Santiago Espinal, Vlad, Alejandro Kirk and Alek Manoah) repped Canada's baseball team. George Springer was also selected, but opted out due to an elbow injury. Manoah pitched the 2nd inning  and struck out the side and hit a batter. Vlad played three innings in the field and got 3 at bats. He was involved in four plays and was 0-2 at the plate. Alejandro Kirk played 4 innings in the field and also went 0-2 at the plate. While the NL scored 2 runs on 4 hits in the 1st inning, they had just 2 base runners over the next 3 innings (off a hit batter in the 2nd inning and a fielding error in the 4th inning). AL pitchers recorded 5 strikeouts with him behind the plate, including three by his regular battery mate Manoah. Santiago Espinal entered the game as a defensive replacement to start the home half of the 4th inning. He made 4 plays in the field and was 0-1 at the plate, but drew a walk in the 9th inning. Jordan Romano never got a chance to play in his first all-star game with manager Dusty Baker opting to have Emmanuel Clase close out the all-star game. I'm sure Romano was just happy to soak it all in and actually playing in the game would have been icing on the cake. Congrats to all for being selected and here's to more all-star appearances in the coming years.

2. Coming out of the all-star break, the Blue Jays have a few injury concerns. First and foremost is George Springer, who missed 2 straight games, including the first day after the break with a nagging elbow injury. The Blue Jays need his bat at the top of the lineup. At the same time, they only need to look at what happened last season when Springer missed basically 2 months with a quad strain. Yusei Kikuchi is nearing a return to health. He had a rehab appearance Friday. He threw 5 innings, but issued three walks. The Blue Jays will likely need him in the rotation for the road trip that begins August 2nd in Tampa Bay where the team plays ten straight days. While he is officially on the shelf with a neck strain, the Blue Jays needed to do something because quite frankly, Kikuchi has been a disaster, walking way too many batters and struggling to get through a third of the game. One start he didn't even make it out of the 1st inning! Chances are, Kikuchi will start as a potential 6th starter or maybe the Blue Jays stick with 5 and put Max Castillo in the bullpen as a long man. Julian Merryweather, Nate Pearson and Taylor Saucedo are all at different points in their rehabs. Saucedo, recovering from a right hip injury, appears to be closest top returning. The lefty reliever has pitched 3.2 scoreless innings in rehab stints this month. Merryweather doesn't yet have a definitive timeline to return. He strained his left oblique back on June 13th. Pearson, who was shut down for a month with a right lat strain, likely won't be an option until sometime in August, if at all. The Blue Jays may need to go the trade route if they need an extra arm down the stretch.

3. The AL East race looks like it's all but over. The Yankees have a commanding lead over the nearest opponent the Tampa Bay Rays who are 12 games back. The Blue Jays face the Yankees 7 more times - four games at Yankee Stadium August 18-21 and three in Toronto September 26-28. The Yankees, who handed the Blue Jays their first series loss May 2-4 and then swept the Blue Jays the following week (May 10-11) at Yankee Stadium, have won 8 of 12 games in the season series thus far and have outscored the Blue Jays 60-35. After this weekend's series against the Red Sox, the Blue Jays have six games remaining against the Red Sox (three at Fenway Park August 23-25) and three in Toronto as the final home series of the season September 30-October 2). So far, the Blue Jays have won 10 of 13 in the season series and have outscored the Red Sox . The Blue Jays have more games left against the Orioles, who they did not face for the first time this season until June 13th. They were initially supposed to face them in Baltimore for the season opening series, but that was pushed back to October due to the lockout. The Blue Jays will face the Orioles twice a week apart in August (August 8-10 in Baltimore and August 15-17 in Toronto). They also meet twice in September (in Baltimore September 5-7 and in Toronto September 16-18). As mentioned, the two squads will end the regular season with three games in Baltimore October 3-5. The Orioles are no longer laughingstocks and could be playing meaningful baseball in September. Depending on how things play out in the remaining games of the season series, they could even surpass Toronto in the AL East standings so the Blue Jays should not be taking these games lightly. Finally, the Blue Jays will be seeing plenty of the pesky Rays, especially in September. They will play the Rays 8 times in September alone, which will include another 5 games in 4 night stretch September 12-15, including a double header September 13th as they make up the other 2 postponed games from the series that was supposed to happen in early April. The first 5 games in 4 days stretch didn't go so well.  The Blue Jays will also face the Rays in Tampa Bay August 2-3 and  September 22-25. All told, 39 games left against their AL East division rivals. Win the bulk of those games and the Blue Jays should be in a pretty good position for a wild card spot.

4. Speaking of the wild card race, the Blue Jays are in the second wild card spot after sweeping the Red Sox. They are 2 games up on the Mariners, who hold the 3rd wild card spot and were swept themselves by the Astros this weekend. Also within five games of the wild card spot are the Orioles, Red Sox, Indians and White Sox. The three game series against the Indians August 12-14 could be huge in the standings. The Indians took 3 of 4 from the Blue Jays in Cleveland May 5-8/ They outscored the Blue Jays 21-18 in that series. If the playoffs started today, the Rays would have home field advantage the Blue Jays in one best of 3 WC series and the Twins would have home field advantage against the Mariners in the other best-of-3 WC series. The Yankees and Astros would receive byes to the divisional round and would face the winner of one of the WC series. Just one division race is still really competitive at this point - the AL Central where the Twins are a game up on the Indians.

5. Taking a look at the NL WC race, the Dodgers and Mets would have byes to the divisional round. The wild card series would pit the 3rd Division leader Milwaukee Brewers against the Phillies with the Brewers having home field advantage. The Braves would have home field advantage over the Padres in the other WC series. The divisional races are tight in the NL East and NL Central with the Cardinals and Braves just a game and a half back of the division leading Brewers and Mets respectively.

6. The Blue Jays welcomed back first base coach Mark "Bud" Budzinsky who returned to his duties after a three week leave of absence to deal with the sudden passing of his daughter Julia, who died in a tragic boating accident on the Canada Day long weekend. It was touching that the team used it's off-day after a difficult west coast trip to attend the funeral for Julia. Hopefully the team rallies around Bud and translates the tragedy to a big second half.

7. The Blue Jays broadcast booth will welcome back broadcaster Buck Martinez, who missed 3 months while undergoing cancer treatments. Martinez is basically a lifelong Blue Jay, playing for the team as a catcher from 1981 until he retired in 1986. After retiring as a player, Martinez became color commentator for TSN from 1987 to 2001 when he managed the Blue Jays for a season and a half. In 215 games, the Blue Jays went 100-115 with Martinez managing the team. He color commentates for the Orioles from 2003-09 and returned to the Blue Jays for Sportsnet as play-by-play and color commentator (he splits the duties) where he presently is career wise. It'll be good to hear his voice again.

8. The Blue Jays Friday offensive outburst deserves a point in this post. Here's some highlights from that game

9. Finally, how about the Blue Jays bullpen? With Tim Mayza getting credit for the win Sunday bringing his record to 4-0 on the season, the relievers are now a combined 21-20. Take away 8 losses from relievers not on the active roster and that's a decent effort. Jordan Romano has 21 saves in 23 opportunities.
10. Blue Jay of the week: Alek Manoah. Six strong innings in his first post-all-star game and struck out the side in his all star appearance. Manoah's going to be a star in the MLB for years to come.
Posted by opinionator777 at 9:31:00 AM