I was expecting more from MSM about the meetings that took place in Dunedin concerning the Jays facilities. Since there wasn't any, I perused the internet and will try to bring everybody up to date on the progress.

The Jay's Spring Training home has been in Dunedin for 40 years. The longest streak for any MLB club to be in the same city for ST. A lovely town described by everyone who has visited. The facilities though are antiquated by todays standards. 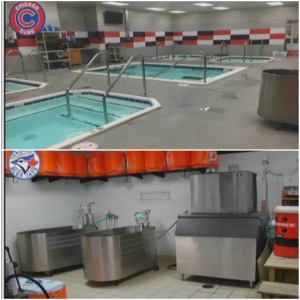 Hydro therapy for the Cubs in the above photo. 2 soaking ( hot and cold) "pools" for the major league team, 2 for the minor league teams and a therapy pool in between.
Dunedin below has 2 therapy "tubs" with an ice machine for ice baths.

Shapiro has made improvements to the training facilities in Dunedin a priority. Ideally, all facilities would be in one place, the stadium, the practice fields, minor league complex and rehab facility. The problem is a lack of serviceable land available to house all of this in one location. The solution, is to expand the existing minor league complex for all of spring training and use the downtown stadium for games only.

Three softball field will need to be removed and relocated along with a dog park but it's doable on the existing land.
Along with this is a major renovation for the Dunedin Stadium.
Note that these are proposals and nothing has been approved as of yet.
According to Baseball Betsy, who is on the Stadium committee, the Jay's are seeking funding and are aggressively promoting a Spring of 2019 completion date.
At the meeting, it was noted that the stadium is used for more than just Spring Training, it is also the home for the Dunedin Blue Jays. The Englebert Complex is used year round by rehabbing Jays players and their minor league affiliates.

Mark Shapiro addressed the council at the end of the presentation and the main contention is, of course, money. Spring training brings in, according to one study, 70/80 million dollars to Pinellas County. Not all of it from the Jays because the Phillies and the Yanks are close by but still a significant source of revenue.
Or are the numbers that high? According to Clutchlings blog.,when Shapiro spoke it got quite testy between  the board and the club. Some experts have claimed that the economic return to the county isn't close to the numbers that have been suggested and while the Jays have agreed to pick up the tab on maintenance ( unlike some other MLB clubs ) the costs may be too much for the Pinellas county to bear.
Even with all the hurdles, permits, money, construction, etc., after all the dust has settled, it is expected that the Jays will stay in Dunedin with new modern facilities.