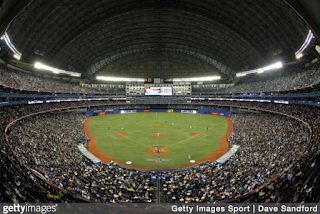 As the Blue Jays players rest their bones in warmer weather this winter, the focus for sports in Toronto has been on the near-children playing hockey. The Maple Leafs are competing with a roster of unprecedented young talent, riding them to relative success at the halfway point of the season. While the Leafs are a youthful blossom of energy, it is safe to say that their baseball neighbours are…not that. The Blue Jays are an old team, one of the oldest in the majors, and they haven’t done anything this offseason to either get younger or stop the passage of time.

Age is only a number, of course, and just because their hitters were the second oldest unit in all of baseball last year does not mean they will necessarily be any worse this year. The Blue Jays hitters should be good! As long as they can stay healthy, a lineup that holds Donaldson, Bautista, Tulowitzki, Martin, and Travis should be among the best in the league no matter when their birthdays are.

What is worrying is the uncertain state of their left field. It was the Blue Jays’ weakest position in the lineup last season, and with Michael Saunders now avoiding sprinkler heads in Philadelphia, the team has put their money down on one of Steve Pearce, Melvin Upton Jr., or Ezequiel Carrera taking over and running with the spot.

Pearce is hesitantly the most attractive of these three. His offence is by far the best (with a wRC+ of 136 in 2016) and his strikeout and walk rates both took steps in the right direction last season. However, Pearce played only thirteen games as an outfielder last year and has never played more than forty-nine games there in any season in his career. Jays fans saw this archetype of player recently in Chris Colabello, a good hitter who was an outfielder in name only, and the memory of him should make Blue Jays fans more than wary of Pearce spending much time in the outfield.

Upton appears to be the nominal opening day starter in the outfield at this point. He’s a solid defender and hit twenty home runs with a ton of stolen bases last season, but produced well under league average overall. This skill set can be valuable to a team, but the Blue Jays already have one outfielder like that in Kevin Pillar and dressing a second player with that same profile does the team no favours. This would be particularly damaging at the plate; no team in the majors made the playoffs with two outfielders producing below league average (by wRC+) in their lineup last year, and the Jays would be taking a big risk by relying on the rest of their lineup to pick up the slack left by Pillar and Upton.

2016 was a high-water mark for Ezequiel Carrera as a pro, appearing in a career-high 110 games scattered across the outfield. Despite this, Carerra produced neither offence nor defence good enough to warrant serious consideration as a starter, and he is most likely going to spend his time as a utility outfielder and lefty-platoon option this season. His versatility is appreciated and he will be loved by teammates and fans as he comes off the bench, but his bat is poor and his defence doesn’t make up for it in the same way Kevin Pillar’s does. With the same argument angled against Melvin Upton Jr., Toronto likely cannot compete if their starting left fielder produces like what can be expected from Carrera. 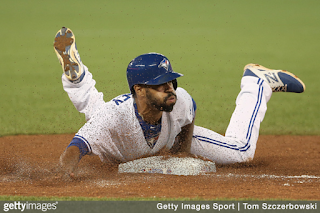 Though the Blue Jays don’t have prospects as inspiring as perhaps the Leafs do, they do still have young talent that could make a difference in the outfield next year, namely Dalton Pompey. The Canadian prospect has been on Toronto’s radar for years now, getting limited time in the majors over the last three seasons with mixed results. He was the opening day starter at centre field in 2015 before struggling and losing his spot on the roster. In 2016, he earned just two at-bats over eight games in his call-up from AAA. Though none of this is reason to expect great things from Pompey going forward, the fact remains he is still an excellent defender - a trained centre fielder - who has put up good offensive numbers in AAA. Pompey is also a switch hitter, and a team as dominantly right-handed as Toronto will find added value because of it. Most importantly, at twenty-four years old he is likely still improving, at least a little, and the Blue Jays should be willing to see what he has to offer in the majors again this year.

It wouldn’t take much for him to stick. As a natural centre fielder, left field should be no problem defensively for Pompey, and run prevention at least as good as Carrera or Upton should be expected. The only question that remains is the offence, and right now he would only have to out-produce two players who are well below average hitters to make himself worthwhile. He certainly has the potential to do just that, even if his major league track record doesn’t show it yet, and with a little patience Pompey could easily lock down a full time job in Toronto.

Even in the best case scenario, it is unlikely that Pompey blows the doors off of anything this year. But right now the bar in left field is low, and a strong defender with the potential to be even near league average offensively is a better bet than the other options Toronto has right now. Baring injury, Pompey is most likely going to begin his season in Buffalo again but for a team like the Blue Jays that are looking at an extremely close playoff race, going with anything but the best option from the start will cost them in the end.
Posted by Unknown at 7:00:00 AM