Spring Training is finally in full swing, and as I am putting the finishing touches on this bad boy, I see a post in my Facebook feed saying Kendrys Morlasses has hit his first dinger. Yay, only 299 more to go to justify having you in place of the Parrot King of Homers (I kid, sorta). Anyways, I don't really follow games during ST, mostly due to times that they air, partial lack of TV coverage, and the lazy part of me just waiting for the small highlight clips the next day on TSN/Sportsnet. The part of me that does like ST is mostly because the league kinda abandons the traditional NL and AL when it comes to Cactus and Grapefruit leagues, and it opens up some games against teams we may not really play that often or at all during the course of the regular season.

Soooooo, I was looking at the Cactus and Grapefruit leagues and wondered what the divisions would look like if the ST leagues were to carry over to the actual season, as we get a somewhat fair mix of AL and NL teams together. I grouped teams based on their divisions during the regular season and kept the same names (East, Central, and, West) for simplicity. This is what I have:


Kinda lop-sided for both leagues in terms of East and West (I had no clue it was this bad), but I do feel that it could make for some interesting scenarios (i.e., in terms of ‘inter-league’ play) for games. I personally like a few teams in the NL (Pirates, Dodgers, Giants - sorry MK, St. Louis, Cubs, Nationals) for various reasons (Pirates unis, Harper/Scherzer being bosses in DC, etc), and would love to see more games played against those teams. Problem: ST leagues kinda nix that, and leaves us with a giant East/West coast bias. But after looking at some of simple concept maps for re-dividing the divisions, we have a fair amount of options as to how things could unfold:

This is where all the present teams currently stand without any divisional borders and kinda leaves all the doors open to what would make most sense geography wise. I also found a few modified maps showing some proposed changes:

This opts for 5 divisons with 6 teams, mostly based on geographical closeness and gives us some cool new match-ups team wise. Only issue would be deciding where that 5 division should lie, unless it's gets split so we have 4 divisions ala NHL style.

This one is simply boiled down to East, West, and Central (yawn…). 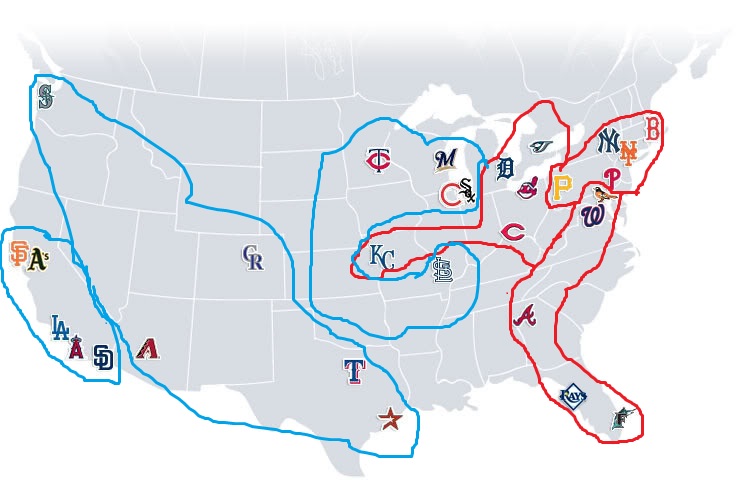 Lastly, these two are probably the most interesting, as one shows having the A’s moved to Charlotte (bonus points if you come up with a name that’s different), and a whole new set up for each division on each map. Say goodbye to the current AL East as well as all the other semi-important divisions, and hello to a division that still sports some fairly fierce competition (sorry Cincinnati) and one that would even gives us KC a division rival (should you like/want that).

I’m kinda partial to the last two maps showing new division changes, primarily because we get the Pirates and Tigers as teams we'd play more often. And the first map having us against Philly and the Mets is pretty cool IMO as well, and I would ideally like something that kind of hybrids those three together. Tried to do it myself and I couldn't decide on who to keep/leave out, but my final one came down to:

Comment on what you’d want division and league wise if you could change it!
Posted by Unknown at 7:00:00 AM