With Spring Training just around the corner, pitchers and catchers for the Jays report Feb.15th,full squad Feb 18th, that must mean we're breathlessly anticipating the World Baseball Classic. Team Canada has been grouped with Columbia, Belarus, Dominican Republic and the US of A. Canada's first game being played March 9 against the DR in Miami.

For those of you interested the Jays have 10 players from their major and minor league teams playing the The Classic.

The Team Canada roster includes some interesting inclusions and exclusions. Most notably, after announcing that he'd be playing shortstop, Russell Russell Martin, has been left off the team supposedly due to insurance reasons and his off season knee surgery. Wait..What? Minor off season knee surgery? Why yes, it appears he did have some knee surgery, that may have been related to his shower incident back in July. I'm not disappointed that Martin is skipping the WBC especially when he had his heart in playing SS. Whew. I had nightmare thinking about what might have happened.
Saunders is skipping the event also. Spending time to get to know his new team mates while having a bonding session with steak and beer.

Smasher's wet dream, Joey Votto, won't be playing either, sending out this statement.
“I am thankful to the Baseball Canada program for inviting me to join the team. It is an honor to represent my country. I made this decision with much reflection because of the pride I have wearing the Canadian flag on my uniform. I look forward to cheering the team on and watching them win the 2017 event."

Also missing from the roster are Brett Lawrie, James Paxton ( via video link) and Jameson Taillon

Also, on a personal note, Jamie Romak, back from a stint in the Nippon League and newly signed to a minor league deal with the Padres, has a place on the team. A few people, myself included, thought he would have had a better career than Votto. So much for my scouting ability. It sucks.

Look at the roster and see what you think. 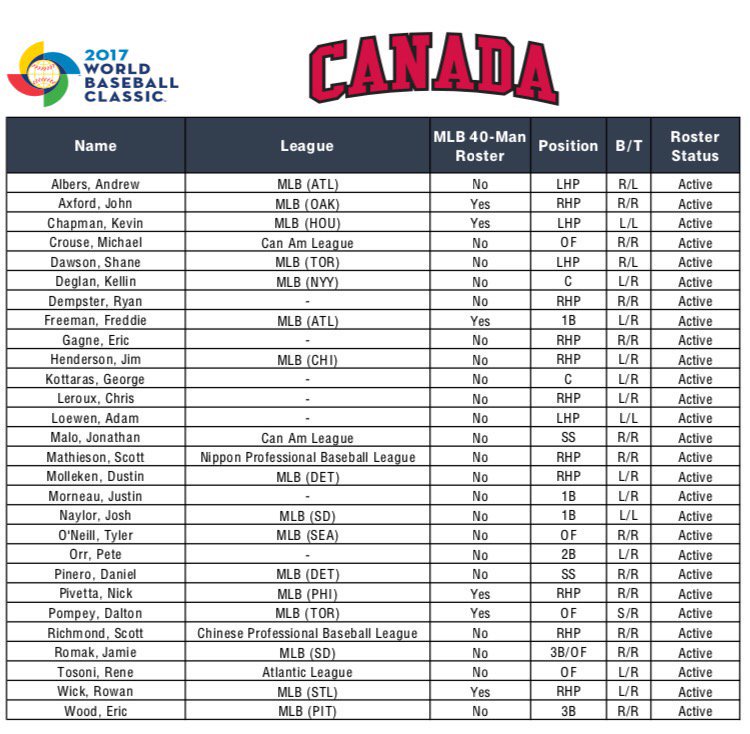